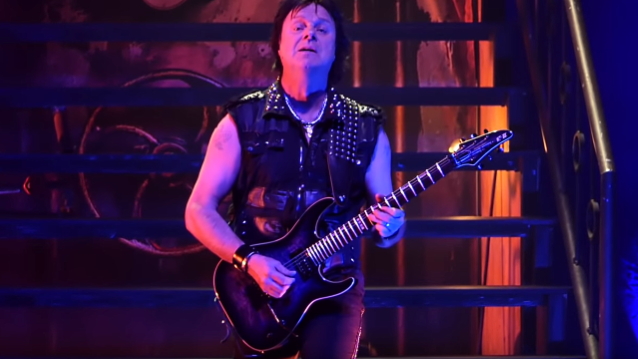 Hansen died on November 4 after a long battle with cancer.

La Rocque addressed his longtime friend's passing during a recent interview with Radio Free Satan's "Metal Invaders" show. He said: "It's very sad. I met him about two years ago. I met him at a SCORPIONS show in Copenhagen, and he looked perfectly fine. That was in November 2017. We went down to Copenhagen. We watched SCORPIONS; [former KING DIAMOND drummer] Mikkey Dee was playing drums. We had a good time. I met Timi there, and he looked fine. Then we met Timi last summer in Copenhagen when we played there. He didn't look well. He was smiling and all that, but we knew, 'He's not feeling very good.' And just a few days before we went over to the U.S. tour, I was in touch with him on Facebook. And then, a week later, he was gone. Yeah, [it's] very tragic. He was a great guy and a great bass player."

Timi went public with his diagnosis in early August after it was announced that he wouldn't participate in MERCYFUL FATE's 2020 reunion. Filling in for him will be ARMORED SAINT and FATES WARNING bassist Joey Vera.

KING DIAMOND frontman and namesake paid tribute to Hansen in a social media post just a few hours after his death. He wrote: "I just found out that I lost one of my dearest friends, who has been fighting cancer for a long time, in such an incredibly brave way. He was not just my roommate on the early MERCYFUL FATE tours, but he was always my favorite bass player of all times. I was fortunate to have been able to visit him at his apartment with some other good friends, and we had a great afternoon that will never be forgotten.

"When I last talked to Timi on the phone on October 24th, I could understand that things had gotten tougher than they ever were, and yet he said 'we fight on.'

"I feel so so sad for his entire family, you have my absolute deepest sympathy.