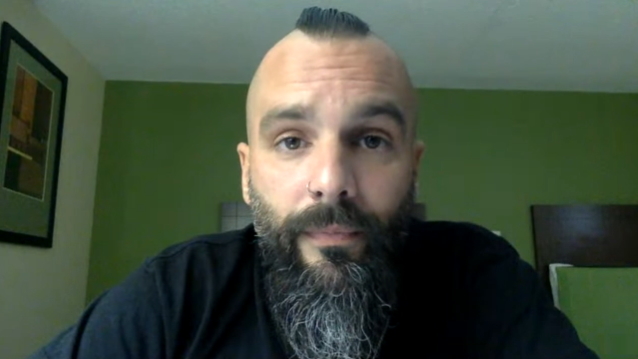 KILLSWITCH ENGAGE singer Jesse Leach took part in an hour-long question-and-answer session with fans via the band's official YouTube channel earlier today. Speaking about KILLSWITCH's plans for the coming months, Jesse said (as transcribed by BLABBERMOUTH.NET): "We're gonna tour as much as we can to make up lost time. We put out 'Atonement', and album we're all super proud of, and it just never got the love and the support it could have because we weren't able to tour on it, we weren't able to promote it. So we'll work on new music at some point next year, but we've got an album that we're all proud of, so we're gonna continue to tour on 'Atonement' and promote those songs. So, yeah, there'll be another year or so of touring before we even consider a new album."

He continued: "I know in this day and age, everybody wants an album every six months, but we're just not that way. We put so much into these albums, I would feel disingenuous if we kept churning out records. I really need to sit and brood and think and dwell to write a good record. I don't wanna ever put out a record that we are not a hundred percent fully immersed in, in its heart and soul. So if you're looking for new KILLSWITCH music, check out the B-sides for charity we did. We put out a ton of music — well, not a ton, but enough. We're just not that kind of a band that can just put out a record every year. So be patient with us. And in the meantime, if you're able to, just come support a show. We'll be touring as much as we can."

KILLSWITCH ENGAGE is currently on tour with SLIPKNOT, FEVER 333 and CODE ORANGE as part of the "Knotfest Roadshow". The band will also appear at several key fall festivals.

On September 10, KILLSWITCH ENGAGE performed without longtime bassist Mike D'Antonio at the Inkcarceration festival in Mansfield, Ohio after he tested positive for COVID-19. Filling in for him was the band's production manager Josh Mihlek.

"Atonement" was released in August 2019 via Metal Blade Records in the U.S. and Sony Music Entertainment in the rest of the world. The disc features guest appearances by the band's former lead singer Howard Jones and TESTAMENT frontman Chuck Billy. It marks the band's third full-length release since the return of Leach, who rejoined the group in 2012.

In July, Leach and guitarist Adam Dutkiewicz released the second album from their TIMES OF GRACE project, "Songs Of Loss And Separation", via the band's own imprint label, Wicked Good Records, distributed by ADA Worldwide.