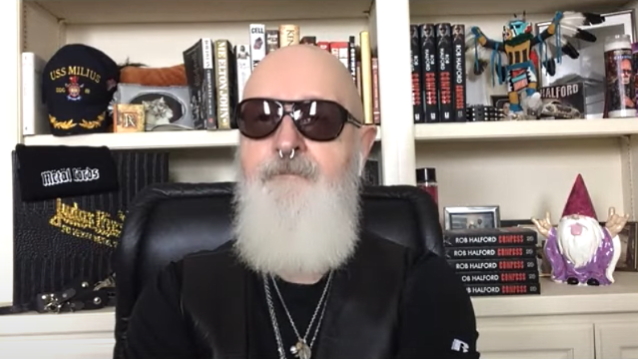 JUDAS PRIEST singer Rob Halford spoke to Spain's Mariskal Rock about his decision to go public with his battle with prostate cancer. He said (as transcribed by BLABBERMOUTH.NET): "It's in remission. I count my blessings — thanks to God. It was a time when… You know, timing is everything in rock and roll and heavy metal. And, of course, this was going on during the pandemic — the initial stages of the pandemic — so the world was completely closed down. PRIEST would have been on a bit of a hiatus anyway, because we had just been around the world three times with [PRIEST's latest album] 'Firepower', so we were gonna be on a kind of a break although we were writing for the new album. And so I was able to take care of three things, really — promote [my autobiography] 'Confess', do some writing with the band before I came back [home] to Phoenix, and then get this cancer business sorted out."

Rob, who previously mentioned his cancer battle in the new chapter added to the updated paperback edition of "Confess", continued: "It's just a miracle what they can do with health care these days; it's absolutely remarkable. So in my story, my main message is to guys everywhere around the world, when you get to a certain age, it's very important that you get your prostate checked, your bloodwork checked, get a colonoscopy. It's all these things that old blokes like me go, 'Wait, wait, wait.' That's the worst thing to do. So that was part of the reason I wanted to push the message out. And the fact that it's been out for a while anyway — it's been out since last September in the final edition of the 'Confess' paperback — so it was gonna surface anyway."

Halford also touched upon Richie Faulkner's recovery after the PRIEST guitarist suffered an acute cardiac aortic dissection during the band's performance at the Louder Than Life festival in late September. Faulkner was rushed to the UofL Health - Jewish Hospital where the cardiothoracic surgery team needed approximately 10 hours to complete a life-saving surgery.

"Along with my issues and just talking about the way that incredible things have happened in my lifetime with medical science especially, when you think about what Richie has just been through recently and the miracle doctors, surgeons, nurses, everybody that have brought him back to us, these people are just unbelievable," Rob said.

"Everything's relative in life. And you never get through life by yourself; you've always got people with you helping you along the way. The fans have helped PRIEST along the way for our entire 50 years. And in other areas of your life, particularly with your health, people are there ready to help, people are there ready to fix you, to get you released for the road again and do all the things that you wanna do.

"So, yeah, I feel good," Halford added. "I feel positive. Richie feels good. He feels positive. I spoke with him just a couple of days ago. He sounded great on the phone. We had a long chat about the tour and all the things we've gotta do still with PRIEST. The journey never ends."

In "Confess", Halford revealed that he was diagnosed with cancer after experiencing symptoms for at least a couple of years.

"I felt a combination of shock, horror, and oddly, relief — at least now I know!…'Am I going to die?'" he wrote. " It was all I could think of. I know blokes who've died of prostate cancer. 'No, you're not going to die, Rob,' said Dr. Ali."

In July 2020, Rob underwent prostatectomy, an operation where the entire prostate gland is removed plus some of the tissue around it, including the seminal vesicles. After more cancer was found earlier this year, he went through radiation treatments in April and May and eventually got then all-clear in June. He also had an appendectomy after a tumor was discovered on his appendix.

"It's been a draining year, I can't deny it, but I'm delighted to have come through it," Halford wrote in the book. "I feel like I've had the most thorough MOT that a Metal God can have."

The 70-year-old said that his outlook on his cancer battle changed after watching a commercial for the Phoenix Children's hospital. "It showed kids with cancer," he said. "Some only babies. They were lying there, with tubes coming out of them, fighting for their lives. They didn't know what was going on…It made me feel totally ashamed of myself; Rob, how dare you be so selfish? And from that second, I change my entire mental attitude towards my disease."

Halford's cancer battle and Faulkner's acute cardiac aortic dissection are not the only health scares the members of PRIEST have had to deal with in recent years. PRIEST guitarist Glenn Tipton was diagnosed with Parkinson's disease seven years ago — after being stricken by the condition at least half a decade earlier — but announced in early 2018 he was going to sit out touring activities in support of "Firepower". He was replaced by "Firepower" producer Andy Sneap, who is also known for his work in NWOBHM revivalists HELL and cult thrash outfit SABBAT.

"Confess" was released in September 2020 via Hachette Books. It was written with Ian Gittins, co-writer of "The Heroin Diaries" by Nikki Sixx.