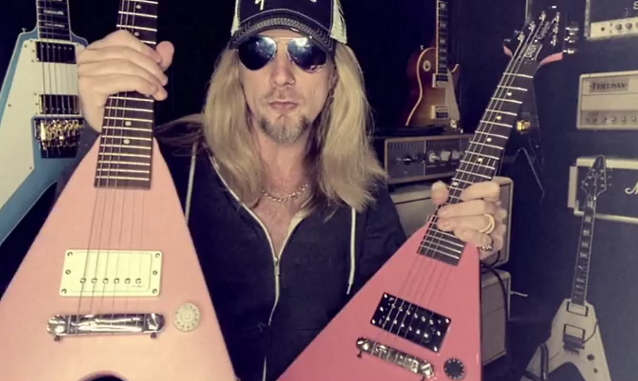 Earlier this week, Gibson CMO Cesar Gueikian posted an Instagram photo of a new Faulkner prototype guitar, leading to speculation that several aesthetic changes have been made to its its Epiphone predecessor, including the relocation of the JUDAS PRIEST logo from the face of the headstock to the truss rod cover, as well as a new dark blue finish.

On Wednesday, Faulkner took to his social media to share a short video of him "introducing" his new Flying V signature models. He said (see video below): "There's been some rumors lately about a supposed signature-edition flying V from Gibson, so I just thought I'd set the record straight here. I've got a couple of examples here. Here we have two examples. One, we have the — this is the starfish pink, and the faded starfish pink, after Patrick from 'SpongeBob [SquarePants]'. One's got an EMG, and one's got a Gibson pickup here.

"Most heavy bands these days, they tune down — drop B and drop A. I've actually tuned up; I think it's heavier," he quipped. "Tuned up to A, 'cause I think that's a lot heavier.

"So I just wanted to dispel some of the myths out there. These are the ones that I will be pushing through, and these are the most metal-sounding guitars I've ever heard. So watch this space."

Faulkner relocated to Nashville in 2019 after spending several years living in Florida.