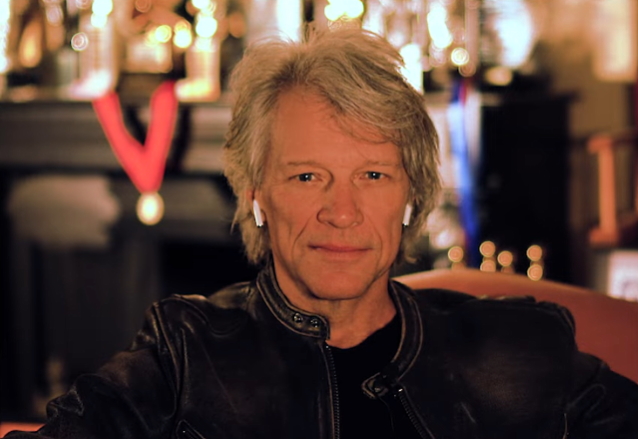 AXS TV recently sat down with legendary BON JOVI frontman Jon Bon Jovi to ask him questions submitted by fans. From how he builds a setlist, what advice he would give to his 18-year-old self, his favorite tour memory with Richie Sambora, get to know Jon a little more with this exclusive 12-minute interview below.

Asked how he goes about putting together a setlist for a BON JOVI concert, Jon said (as transcribed by BLABBERMOUTH.NET): "Let's pretend that on an average night, there's 23 or 24 songs. 15 of 'em are gonna have to be the hits, which leaves me eight songs to play with. Four are probably gonna be new songs, which is gonna make the artist happy, and then two of 'em get to be the crazy album track or cover song that you just feel like getting your jukebox on. And that's pretty much what you're relegated to — simply because if I come to your town and I don't play 'Livin' On A Prayer' or 'It's My Life' or '[You Give Love A] Bad Name' again, you're gonna be disappointed. I don't wanna disappoint you.

"I remember when I was a kid seeing a couple of guys that I grew up listening to who ended up playing reggae versions of their classic hits, 'cause they were tired of playing 'em," he continued. "And I was at, like, a bingo hall watching 'em play. I was, like, 'I get why you're doing it, but this is the first time I ever got to see you, and I'm crushed.'

"So, [fans] wanna hear 'Prayer' and 'It's My Life' and 'Bad Name' and 'Wanted [Dead Or Alive]' the way they were written and recorded."

Over an illustrious career spanning more than three decades since its formation in 1983, BON JOVI has earned their place among global rock royalty and was inducted into the Rock And Roll Hall Of Fame as well as the Songwriters Hall Of Fame. With over 130 million albums sold worldwide, and extensive catalog of hit anthems, thousands of concerts performed in more than 50 countries for more than 35 million fans, and ticket grosses well over $1 billion around the world in the last decade alone, BON JOVI is the consummate rock and roll band.