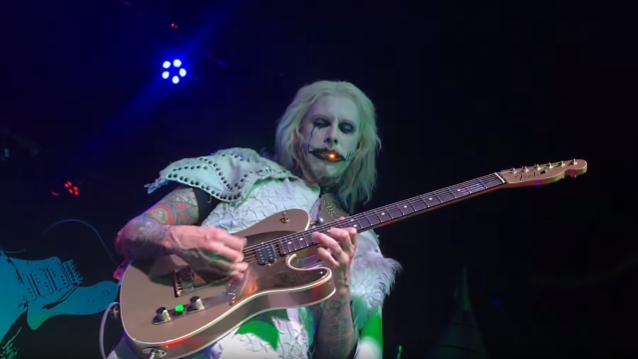 JOHN 5 AND THE CREATURES — comprised of world-renowned guitarist John 5 (ROB ZOMBIE, MARILYN MANSON), bassist Ian Ross and drummer Logan Miles Nix — have released a teaser for their next music video, "I Want It All". The clip was directed by Israel Perez Hortal and will make its online debut on July 31, the same day JOHN 5 AND THE CREATURES' new album, "Invasion", is released.

Just like 2017's "Season Of The Witch", "Invasion" — produced and mixed by Barry Pointer — is being made available via a series of music videos.

John told "Wired In The Empire" about "Invasion": "It's something I've been working on for a long time and I'm releasing a new song and a new video every month. I think it's a really great way to do something like that. It keeps the record alive and keeps people interested in what's going on with everything so a record doesn't die in a month or something. It keeps the record alive for a little while and it's wonderful. It really has been working out well. The songs — we've been having a lot of fun playing them and we've really been having a great time."

JOHN 5 AND THE CREATURES will team up with THE ARISTOCRATS for a co-headlining show on Sunday, September 1 at 1720 in Los Angeles. The show will be the first John 5 performance following the release of "Invasion".

"John 5 and THE ARISTOCRATS — it doesn't get much better than that," John 5 said. "It's one show only and you're not going to want to miss it. It's going to be a very exciting night and definitely one to remember."

John 5 has worked with a varied range of artists, performing as guitarist for some of the biggest headlining rock bands in the world such as ROB ZOMBIE and MARILYN MANSON, as well as playing session with Paul Stanley, Rod Stewart, LYNYRD SKYNYRD and more. Slash has called John 5 "one of the most mind-blowing guitarists around," and Rob Zombie has dubbed him "a fucking shredder." John 5 has released seven solo albums to date, as well as a remix album, and has written music for the likes of Avril Lavigne, GARBAGE, Ricky Martin and others.