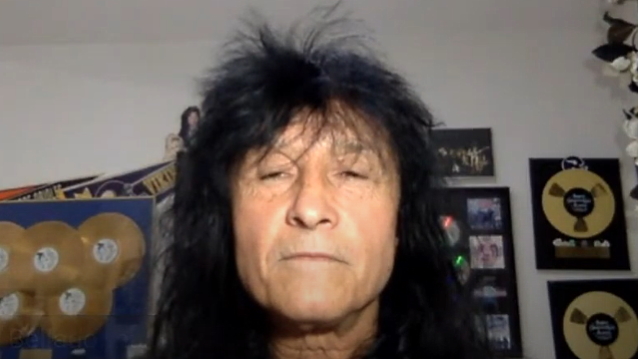 In a new interview with "R.A. Nation", ANTHRAX singer Joey Belladonna touched upon the fact that the none of the "Big Four" bands of 1980s thrash metal — METALLICA, ANTHRAX, SLAYER and MEGADETH — sound alike despite the fact that they had a lot of the same influences. He said (as transcribed by BLABBERMOUTH.NET): "Speaking of the 'Big Four', the whole lineup and that stuff, it was really nice to have differential type of bands and different sounds and vocals and just the whole aura of it all; I love that part."

Joey also attempted to explain how ANTHRAX has managed to keep producing quality music several decades into its career, with many people calling the band's latest album, 2016's "For All Kings", the group's strongest effort to date. "I think that we just have such a good vision of what we wanna sound like and how we just, as a group, go into a record," he said. "I just think it's so fun because there's such great ideas, and we have a wide ability to take on all kinds of things. We're not just stuck in one zone; I think we have a lot to offer. Every record you feel it. Like right now, I can't wait to do another one because it's just an adventure every song. And you never know what you're gonna get too. I mean, we really take our time. Obviously, it takes us a little longer [to put out a new album] than most bands sometimes, I think, because it's just not that straight-ahead thing. There's so much going on to the songs, we just want it to be really, really hot and heavy and strong and everything."

As for how he personally approaches making albums, Belladonna said: "I always just kind of go in there and just do my thing. I don't really do anything different. I think I'm just as focused as I can possibly be. I think I'm a lot more relaxed about it. I don't seem to worry about it as much as I would before. You do what you do and you just kind of strive [to do the] best you can with [each] record."

"For All Kings"'s arrival followed a five-year period during which the group experienced a rebirth of sorts, beginning with ANTHRAX's inclusion on the "Big Four" tour, and continuing with the 2011 release of comeback LP "Worship Music".

Belladonna, whose most recent return to ANTHRAX was officially announced in May 2010, was originally the lead singer of ANTHRAX from 1984 to 1992, and was considered part of the band's classic lineup (alongside Dan Spitz, Ian, Frank Bello and Charlie Benante), which reunited and toured during 2005 and 2006. His voice was featured on over 10 albums, which reportedly sold eight million copies worldwide.

Belladonna had been critical of ANTHRAX's decision to fire him at the height of the band's success, telling MikeJamesrRockShow.com five years ago: "Personally, it sucks just to think all those years went by that I didn't really have a chance to do anything. 'Cause I could have sang on any of those records [that were made during the John Bush era]. Not to say that what they did was… whatever reason and whatever style and all that stuff. I could have easily sang that regardless, no bones. It would have been easy to sing. It's just I think they were chasing some other idea. I always say that, whether they disagree. I don't think there was any reason to move. But you know what? We're here now."