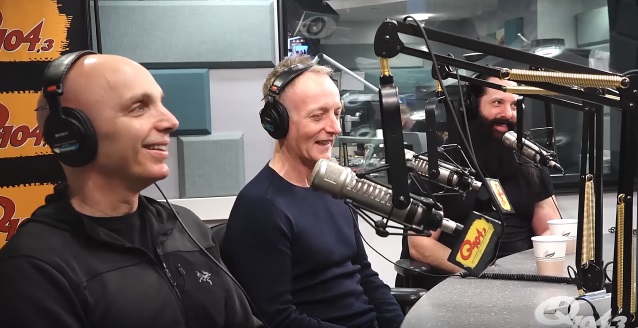 On how Collen came to be invited to join the tour:

Joe: "Last August, in Carmel-by-the-Sea, California, we had a 'G4 Experience', which is, like, a five-day, total immersive guitar extravaganza. The campers come and they get to hang with us all day long, attend clinics, watch performances, hang out and jam with us, and Phil blew everybody away. He just brought everything — he brought the experience and his musicianship to everybody, the beginners, the pros, and the rest of the stars that were part of the 'G4 Experience'. We just had such a great time, and it was a wonderful chemistry on stage. We were totally blown away when all of a sudden he made himself available for a 'G3' tour. We're so lucky to have him."

Phil: "It's great. I think the main thing is, I get inspiration off of these two. It's like crazy, every night. We're actually creating music on the fly, so a lot of the time, especially on the 'jam' part, someone will play something that's like, 'Oh — what's that?' It just automatically — it's unbelievable. That's the magic of it, you know. That's the magic of being a musician, that discovery. We're actually discovering and creating music on the fly. It's total magic, wonderful."

On the tour's camaraderie:

John: "What makes it really a lot of fun is that there's this traveling community of musicians who just are having such a great time, love sharing stories, musical experiences. I really look forward to that aspect of G3 – not only being able to play, and play with Joe and Phil and jam, but being in that environment with all these amazing musicians. It's very cool."

Joe: "With 'G3', everybody gets to do their thing with their band in front of the audience before the jam starts, so we kind of exorcise all those gunslinger demons, and then by the time we get on stage [together], everyone's so relaxed, and we're ready to do something new, that we didn't do last night or the week before.

"We go out there, I think, with the express desire to see how we can push each other. But we're looking at each other — we're elbow to elbow — and after the show, we talk about it for a half hour. If anything happened that someone didn't know how to do, we discuss, like, 'Well, this is how you do it,' and 'Wasn't that funny?', and 'Wasn't that cool?' We're definitely out there pushing each other."

On whether Petrucci plans to play with his ex-DREAM THEATER bandmate Mike Portnoy again in the future:

John: "We haven't talked about it. Mike and I, the funny thing is we've recently on New Year's posted a photo of the two of us, just because we were like, 'Let's just post a photo.' But we had been hanging out already for a few years. It's all been good. You've got to understand, in DREAM THEATER, we all started at the same time — we were, like, 18 years old; we all kind of got married around the same time; all of our wives are friends; all of the kids are friends; so it's like, we've been in contact and in touch for so long. But yeah, no plans of doing anything together. It's great to always have that stuff be smooth and friendly. Band members change — it happens — and to keep things all nice and copasetic and friendly, that's the only way to go."

On Satriani's new album, "What Happens Next", which features Glenn Hughes on bass:

Joe: "He wasn't allowed to sing. It was by design that he would come and channel all of his amazing musical energy into that bass guitar. The odd thing was, as he would do naturally because he's born to do it, I would secretly write down these little scats that he was doing, and after we finished the first seven days of tracking and he was going over some of his bass parts, I would go over my notes and I'd say, 'You know, Glenn, on this song, you started singing these things in between my melody lines. Can you play that?' I'd just sing it to him, and he would just play it, and on the bass, it sounded like his voice. It was really uncanny. He added all these little fills that actually came from his vocalizing, so it was an interesting way to draw more [from him]."

The 2018 North American "G3" tour featuring Satriani, Petrucci and Collen will wrap up February 25 in Milwaukee, Wisconsin. Satriani and Petrucci will then overseas for a six-week European "G3" tour, which will also feature former SCORPIONS guitarist Uli Jon Roth.

Satriani's sixteenth solo album, "What Happens Next", was released on January 12 via Sony/Legacy.