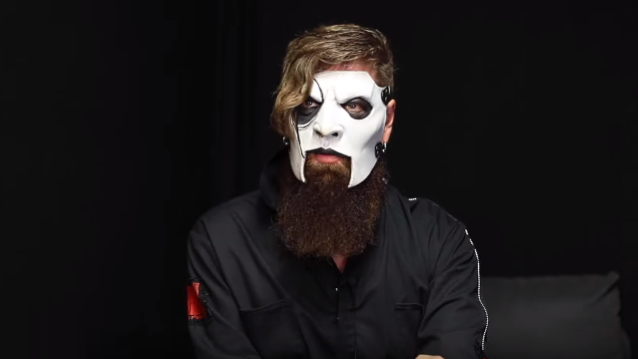 In a brand new interview with France's Heavy1, SLIPKNOT guitarist Jim Root was asked if he and his bandmates are more optimistic about the group's future now than they have been at various points in the last decade, particularly following the loss of bassist Paul Gray and the departure of drummer Joey Jordison. He responded (see video below): "I'm afraid to be [optimistic] about it, because in the past, we never knew what was gonna happen and we always worked it out and and we always came together and we always did it. Now I'm afraid that the reverse-psychology Murphy's Law thing would… If we say, 'Oh, we're happy. We're great. Everything's good. We're gonna keep making records forever,' then that would mean that we're not. [Laughs] You know what I mean? Kind of a reverse-psychology thing.

"I don't have a crystal ball," he continued. "I can't see the future. I know I really enjoy writing music for this band. I enjoy the level this band's at. All the dues that we've paid over the past 20 years, I'd hate to see all that go to waste.

"We lost a couple of guys along the way, and those guys are still dear to my heart and soul, and we wouldn't be the band we are without them. And for us to just dissolve, it would be a fucking shame."

After the interviewer pointed out to Root that percussionist Shawn "Clown" Crahan is the last remaining founding member of SLIPKNOT, the guitarist was asked at which point he would decide not to go on with the band if "other fellows" had to leave. He replied: "That's hard to say, 'cause this band is so much more than each one of us. It's not about any one of us; it's about the whole. And in some ways, it's become a culture. We have a huge community of fans, and some of them are probably so die-hard that they wouldn't be interested in the band without a few of the original guys left in it, and some of them don't really care, as long as it's still the band putting out what the band puts out. And I don't know where to draw that line, and I don't know where it makes sense. I think I just would go back to, as long as we're enjoying what we're doing and we're creative and we're still growing as artists, it'll always be. And if we wake up one day and we're, like, 'Why are we doing this?' Or we're only doing it for money, or we're only doing it for some other reason that doesn't have integrity, then there's no point in doing it anymore."

SLIPKNOT is continuing to tour in support of its latest album, "We Are Not Your Kind", which came out last August. The disc sold 118,000 equivalent album units in the U.S. in its first week of release to land at position No. 1 on the Billboard 200 chart.