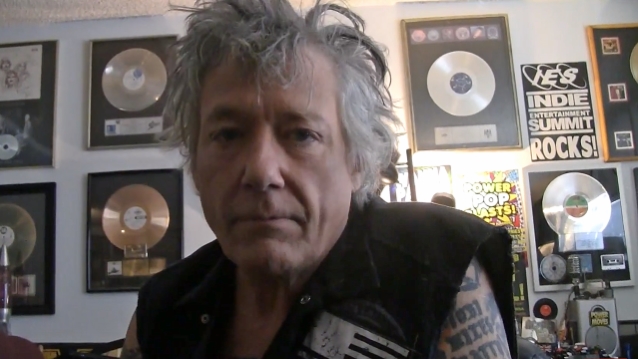 A revamped version of KINGDOM COME — comprised of guitarists Danny Stag and Rick Steier, bassist Johnny B. Frank, drummer James Kottak, along with singer Keith St. John (formerly of MONTROSE and LYNCH MOB) — will celebrate the 30th anniversary of the release of the band's self-titled debut album by embarking on a U.S. tour in the fall. Original singer Lenny Wolf declined to participate in the trek, which will kick off on September 27 in Seattle, Washington.

Kottak, who played on KINGDOM COME's first two albums, 1988's "Kingdom Come" and 1989's "In Your Face" before leaving, spoke to IndiePower.com about the band's setlist for the upcoming tour.

"What's funny is, we went through this, and everybody said, 'You've gotta play the entire first album,'" he said (see video below). "Okay, we are doing that. There's only 10 songs — that's 48 minutes. But the second album is really awesome, so we picked about four or five songs from that. And then also, because Keith St. John and myself played with MONTROSE, we're doing a MONTROSE song, and, of course, man, we're gonna play some [LED] ZEPPELIN — 'cause I love me some ZEPPELIN.

"It's gonna be fun, it's gonna be a party — it's not all seriousness," he continued. "It's about entertaining the troops and everybody who's here. And we wanna make everybody happy and deliver everything — not just KINGDOM COME. Because, quite honestly, after an hour and 15 minutes, it's, like, 'Next.' I wanna play some rock and roll — I wanna play everything."

Kottak also talked about his September 2016 dismissal from the SCORPIONS during his well-publicized battle with alcoholism. (He has since been replaced by former MOTÖRHEAD drummer Mikkey Dee.) Calling his exit an "amicable departure," he said: "I have had my problems with alcoholism — I will not deny that. I've been in recovery for about two years. I'm not perfect; I've struggled. I've been up, I've been down, I've been in and out. But the thing is that I'm working my program, and I'm working hard, and I don't preach it — I'm not going, 'Don't drink.' Eff that, man. This is my personal situation. I've had my problems with alcoholism. Thank God I was never a pill addict — that was never my cup of tea. And it is what it is. And I acknowledge that, and I'm working on it. And it's a thing. And I have the gene — I'm an alcoholic. But the thing is I'm working on it…"

The drummer, who joined the SCORPIONS in 1996 and played with the band for 20 years, continued: "I'm not special. I'm a guy — I play rock and roll drums in a rock band, and I'm just a guy. The thing is I have the gene and I'm an alcoholic. But I'm working on it. And it's progress, not perfection — and that's what it's all about."

This past June, Wolf issued a statement via his official web site in which he said that it was "time" for him "to let go" of KINGDOM COME. "I'm not saying that I will never write a song again, or never again enter a stage, but the chapter called 'KINGDOM COME' is now closed," he said. "One day I may revisit the music scene with a new band called 'IRON BANANA', but until then, it is what it is.

"I hope the KINGDOM COME songs have given many of you energy, joy and strength, as they did for me," Lenny said. "The KINGDOM COME songs will live on, long after we all have turned to dust, and will hopefully do the same for many generations to come, unless of course, we have blown up our planet before then."

After its early run of success in the '80s, KINGDOM COME released several albums, with Wolf remaining the only constant member of the band. The group's most recent effort was 2013's "Outlier".