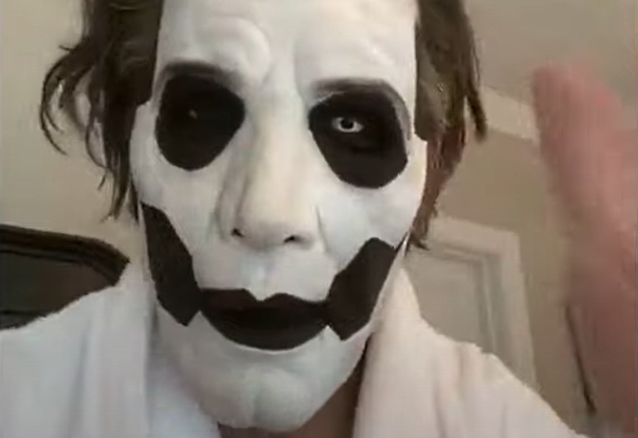 GHOST has returned with the latest chapter of its webisode series in which frontman Papa Emeritus IV is seen talking remotely to Sister Imperator via "Doom", a play on the name of the video conferencing software Zoom. In "Chapter Nine: Tomb It May Concern", they discuss his visual presentation for what is expected to be an imminent official announcement of a rumored U.S. tour with another well-known European hard rock/heavy metal act.

Last October, GHOST mastermind Tobias Forge told Sweden Rock Magazine that he was planning to enter the studio in January to begin recording GHOST's fifth album. "The actual recording will last around six weeks and then there's two to three weeks of mixing and mastering," he said. "So sometime in March the record should be finished, but it won't be released until after the summer. As it looks now, knock on wood, we will then go on tour. We won't release an album until we know that we are actually going on tour. The album release will coincide with the start of a tour. Of course, we could announce an album release date and then, for some reason, it might not be possible to tour, but that's a whole other matter."

Forge performed as a "new" Papa Emeritus on each of the band's first three LPs, with each version of Papa replacing the one that came before it. Papa Emeritus III was retired in favor of Cardinal Copia before the release of 2018's "Prequelle" album.

"Prequelle" debuted at No. 3 on the Billboard 200 and featured the chart-topping singles "Rats" and "Dance Macabre".