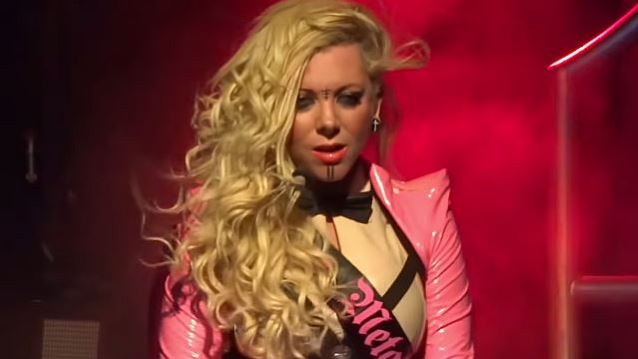 On May 26, KFMX host Wes Nessman conducted an interview with IN THIS MOMENT singer Maria Brink at the 2015 Big Purple Party in Lubbock, Texas. You can now listen to the chat in the YouTube clip below.

Asked how it feels to be the current "go-to" singer for modern rock acts looking to collaborate with female vocalists, Brink responded: "You know, it's an honor. I think that's kind of part of some of the realization I've been having lately with some of these bands. And there's another band [that I recently worked with]. It's somebody I really, really liked a lot always and was inspired by…" After denying the group in question was SHINEDOWN, she went on to state: "I can't say [who it is]. But anyway, what I'm saying is FIVE FINGER DEATH PUNCH, PAPA ROACH and this other band, it's cool. Even to perform [the PAPA ROACH song 'Gravity'] with [PAPA ROACH singer] Jacoby [Shaddix]… I remember back when I first listened to them [PAPA ROACH] and my career hadn't done anything yet. I was just getting ready to move to California to try to find my dream. So if somebody would have said, 'You'll be up there in front of these crowds with Jacoby,' or all these things that are happening… It's surreal. It's a blessing. And I try to stay in that gratitude and not lose the magic by being a perefectionist or all those things. I try to really appreciate it."

The band released "Rise Of The Blood Legion – Greatest Hits (Chapter 1)" on May 5 in celebration of their first decade of work.

The album includes material from IN THIS MOMENT's first four studio albums, including "Prayers", "The Promise", "Blood" and "Adrenalize". Material from "Black Widow" album does not appear.

In addition, the album comes with a DVD featuring some of their greatest video hits.