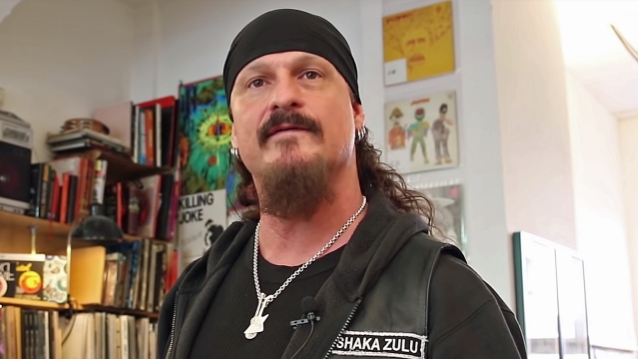 ICED EARTH leader Jon Schaffer says that he isn't concerned about alienating any of his band's fans by voicing his political views in his interviews.

The guitarist — who has previously described himself as "a constitutional conservative" — has been discarded by some as a conspiracy theorist after launching his SONS OF LIBERTY solo project by appearing on a program hosted by Alex Jones, the Austin-based provocateur well known for pushing baseless, dangerous accusations that are magnified by outlets such as his syndicated radio show "Infowars" and his various web sites.

Asked in a new interview with Zombitrol Productions if he thinks some ICED EARTH fans may be turned off by his political beliefs, which he often espouses in the press, Schaffer said (hear audio below): "No. I mean, this is not a popularity contest. Even though you may think it is, it's not. This is my life, my soul, my spirit and I'm a songwriter. And I'm not going to live in fear from the dumb shit that people say, whether they get it or not. It doesn't matter. If somebody cares enough about the facts, they would look deep enough into what I actually stand for, which is really ultimate freedom. I'm about as close to an anarchist as you can be. I'm not a fan of government, I'm not a fan of the left — they're just as ridiculous as the extreme right. You follow the circle and you end up meeting. Both ends of the spectrum will end up at the same point at some point, when you go extreme either way. So I don't really care."

He continued: "If ICED EARTH was to be alienated because of my personal view on things or the way that it gets delivered to the press, I don't think those are the kind of fans I want anyway. They're not deep enough to be an ICED EARTH fan. So, go listen to fucking Britney Spears or whatever — the pop — which is the ultimate dumb-dumb music. And that's not what metal is. But then I know there's plenty of metalheads out there that just buy into the clickbait and buy into the headlines and don't do any research, and it's just easy. So, whatever. I don't care. I don't need to please everybody. That's not what I'm here to do."

Schaffer also talked about how the fractured nature of news coverage and the Internet makes getting to the truth that much harder, especially in the current contentious and divisive political environment.

"I'm not a right-wing extremist, and I'm not a left-wing… I don't play the Republican-Democrat game — I don't do it; I have no interest in it," he said. "It's shallow, it's stupid, it's divisive, and it's a game that's played by the establishment to keep people fighting. I'm an American first — that's where I was born, that's my country, and I'm loyal to the Constitution and the Bill Of Rights. And, really, if you dig into that, those documents and the people who wrote them are not perfect and they weren't perfect, but they were pretty fucking amazing, and they understood history and they understood tyranny.

"We're moving into a very tyrannical system," he continued. "The people are just wealthy enough to be able to deal with it. They think it hasn't affected them yet — a lot of people — but it is affecting them. It's affecting them through inflation and the loss of purchasing power with their currency and the loss of rights and the brutal taxation that's going on everywhere.

"This is civilization in collapse. The reason it's rolling out the way it is is historically what always happens. So it is happening. You can sit around and go to sleep and watch television, if that's what you wanna do, 'cause that's what it's there for — it's a weapon. And if that makes me an extremist, okay.

"I understand the situation very clearly," Schaffer insisted. "I've been studying history my whole life. I know what's going on to a large degree. But do I really care if everybody gets it? No. I don't. 'Cause there are enough people out there that do. Does that mean it's gonna change anything? I don't really know. Time will tell. Nothing is gonna change until things get a lot worse. It's a slow creeping death right now, but at some point, there's gonna be some serious fallout from all of this. And it's not because of something that the Democrats did or the Republicans did. They all did it. The whole Western system right now is completely backwards from what we've been sold. It's in collapse. It's happening. What it looks like on the other side, I'm not sure yet. That depends on, I guess, how things get bad for the people and if they start going back to the fundamentals of individual liberty and freedom, which is always a much more peaceful outcome than government abuse and government monopoly. On currency or on the use of force, they have the monopoly on it. So… I'm not a monopoly guy."

Schaffer recently teamed up with his old pals in PURGATORY, the band that he originally founded in 1985, then later became ICED EARTH, to record five tracks that were written between 1985 and 1987. The resulting "Purgatory" EP was released on December 21 through Century Media. The EP includes liner notes and comments by Schaffer, Gene Adam, Greg Seymour and Bill Owen and fitting cover artwork by David Newman Stump and Roy Young, known from their excellent work on ICED EARTH's latest album, "Incorruptible".