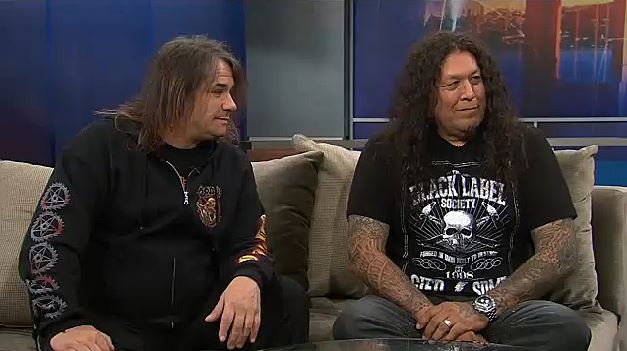 This past week, San Francisco's Fox affiliate KTVU got a chance to speak with two major figures from the Bay Area's influential thrash-metal scene when TESTAMENT frontman Chuck Billy and recently returned EXODUS lead singer Steve "Zetro" Souza visited the TV station's studio. You can now watch the chat below and read a text version of the interview at KTVU.com.

Speaking about how Breaking Bands — the management group that Chuck is a major part of — had a big part in the early negotiations about Zetro rejoining EXODUS, Billy said: "The band and Rob [Dukes] — the previous singer — before we got involved with EXODUS, they had history with him. Without going to deep, we didn't know much about that. All we knew at that point was that we were getting ready to do a new record and that possibly Rob might not be on this one."

He continued: "What do we do? Do we go out, start from scratch and get a new singer, or do we maybe bring Zet back into the fold? That's where it kind of went. So we all tossed it around and said, 'Well, probably the easiest thing that makes sense too is Zet, because Zet knows all the old material. Because he was in the band and I think he could step right in and nail the new record right away.'

"So that's kind of where it started. We just had Zet come in and sing a song. Let's just start there with a new track off the new record. So Zet had about one day to listen to it. And he came in the next day and knocked it out in one take and we sent it to Gary [Holt, EXODUS guitarist] and [the other guys in the band]. And they said, 'Okay. We know what we're going to do.'

"And that's about how it happened. It wasn't a big management thing. We just facilitated and made sure they all were going to communicate. Because communicating among band members, especially bands that are trying to get back together, it's not the best. [Laughs]"

Added Zetro: "It was ultimately their decision too. Gary is very much hands on with what goes on in EXODUS's business. Nothing goes by in this band without Gary taking a wink at it first. So if this was going to happen, it was obviously him and Tom [Hunting, drums] and Jack [Gibson, bass] and Lee [Altus, guitar] to would make that decision. And they did! And I think they're living with it quite well. I'm really proud of [the latest EXODUS album] 'Blood In, Blood Out'; it's a great record. I think they wrote a great record and I was very fortunate to get to sing on this album."

Chuck also talked about how he came into TESTAMENT after Zetro left TESTAMENT precursor LEGACY.

Said Billy: "It was pretty quick. I knew Zet because we grew up in Dublin and he was friends with my younger brother. So Zet was around the house and we were all around together. Zet started the band LEGACY and we were watching the guys play locally in the Bay Area. And Zet decided he going to leave and join EXODUS, and he called me up. I think at the time I had just finished some vocal training and he said, 'Hey, give [TESTAMENT guitarist] Alex Skolnick a call. Those guys are looking for a singer.' So I did. I went in there and auditioned and got the gig. And they actually had record deal with Zet. And I came along and did a demo and the deal still held up. And here we are 28 years later!"

He added: "When I first joined [TESTAMENT], Zet had written all of those songs, so I had to learn that whole style of what the band was about at that point. And I came into my own during the second record, but over the years we've been friends. Actually, Zet is a songwriter in TESTAMENT with me. We still collaborate on lyrics together to this day!"