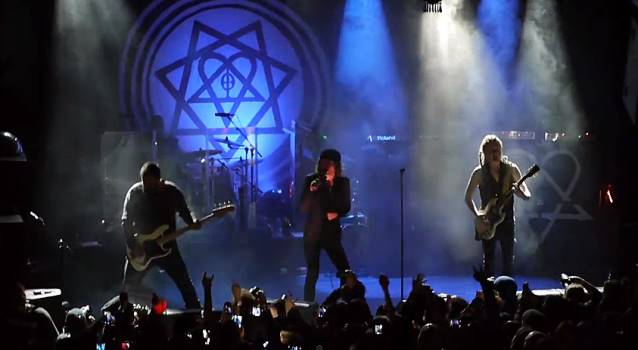 Fan-filmed video footage of HIM's March 14 performance at Irving Plaza in New York City can be seen below.

Early albums from HIM were recently digitally reissued via The End Records, with deluxe versions in multiple configurations to come this summer. The albums that have been reissued are the band's 1997 debut "Greatest Love Songs Vol. 666", 1999's "Razorblade Romance", 2001's "Deep Shadows And Brilliant Highlights" and 2003's "Love Metal". Also available on iTunes is "XX - Two Decades Of Love Metal".

"We feel truly blessed to have our sonic offspring being given a new lease of life in the U.S. by The End Records, the home for many of our aural idols, both old and new," said HIM frontman Ville Valo in a statement.

"For the past months, the infamous 'Love Metal' archives have been extensively scoured by us for rare, exclusive and downright scary musical nuggets for an experience in Finnish melancholy like no other, so please consider yourself warned…"

In a recent interview with Australia's TheMusic.com.au, Valo talked about why the band decided to call its music "love metal". "It was to test the sense of humor of metalheads, and rock fans," he said. "Some people take it all too seriously. They should sit down for a while and have a cup of tea and unwind."

Ville acknowledged that "love metal" a ridiculous tag, but it's no more a ridiculous than anything else used to describe a subgenre of music.

"Take your work seriously, but don't take yourself seriously," he said.

"There was this whole thing when we started out where people couldn't figure out what box to put us in, where we fit in the scene… But I grew up with VENOM, who more or less invented black metal, and MOTÖRHEAD and the early stages of speed metal. These are all kind of ridiculous terms for music, really, so we wanted our own little ridiculous term. Something that meant we could say we were something else as opposed to saying we were a goth band or a metal band or whatever. Because we have a lot of influences from all over the place."