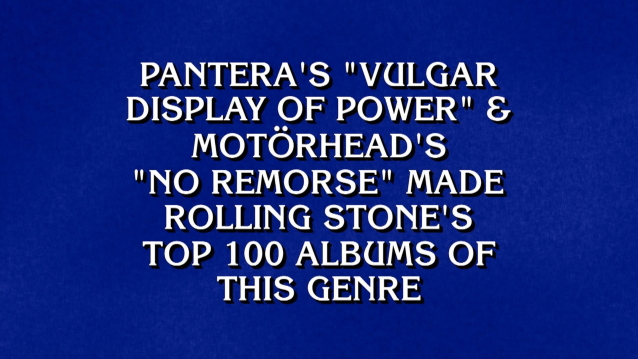 A question about PANTERA and MOTÖRHEAD was included in tonight's (Tuesday, June 8) episode of the long-running game show "Jeopardy!"

In the category "Musical Genres", contestants were given the clue "PANTERA's 'Vulgar Display Of Power' & MOTÖRHEAD's 'No Remorse' made Rolling Stone's Top 100 Albums of this genre" by guest host Mayim Bialik.

A contestant guessed the correct question — "What Is [Heavy] Metal?" — without wasting a single second.

A short time after the episode aired, Rolling Stone tweeted about the magazine reference, writing: "Did you catch the latest episode of Jeopardy? Find out why we put Pantera's 'Vulgar Display of Power' and Motörhead's 'No Remorse' on our 100 Greatest Metal Albums list." The tweet also included a link to the article in question.

"Jeopardy!" began in 1984. This game show, which generally airs weekday evenings, features three contestants answering a series of questions (posed by the host in the form of an answer) on a variety of topics. Each question has a monetary value and contestants can get extra points if they hit a "Jeopardy!" "Daily Double." The final segment of each episode has them answering a "Final Jeopardy" question. Whoever has the most money accrued at the end of the show gets to return to compete on the next episode of "Jeopardy!"

Did you catch the latest episode of Jeopardy? Find out why we put Pantera's 'Vulgar Display of Power' and Motörhead's 'No Remorse' on our 100 Greatest Metal Albums list: https://t.co/EnS2RtEk4y pic.twitter.com/gSVirEK32Z