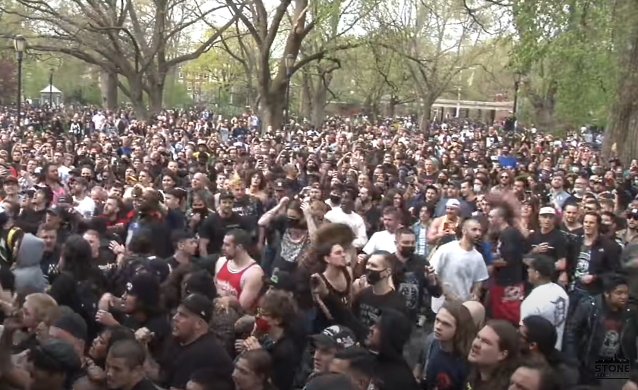 According to Gothamist, this past weekend's hardcore concert at Tompkins Square Park in New York City is under investigation by the New York City Department of Parks and Recreation for allegedly violating capacity limits instituted to stem the spread of COVID-19.

The April 24 event, which was headlined by MADBALL, reportedly drew between 2,000 and 3,000 spectators. The concert was organized by Black N' Blue Productions and was a free, unticketed event, but the bands — which also included MURPHY'S LAW, BLOODCLOT (former CRO-MAGS frontman John Joseph) and THE CAPTURERS — solicited donations on GoFundMe beforehand for the New York Firefighters Burn Center Foundation (over $6,000 was raised).

A New York City Department of Parks and Recreation spokesperson told Gothamist: "This matter is actively being investigated as the permit application filed and agreement appear to have been violated — future permits are in jeopardy."

Last month, New York Gov. Andrew Cuomo announced that beginning April 2, live performance venues in the state would be able to open indoor spaces at 33 percent capacity or up to 100 people indoors and 200 people outdoors. If all attendees present proof of a negative coronavirus test prior to entry, capacity can increase to 150 people indoors and 500 people outdoors, according to the state.

Another hardcore show is currently scheduled to take place at the park on May 8 — featuring ANTIDOTE NYHC, KINGS NEVER DIE and THE LAST STAND — but that event may be in jeopardy now.

On Sunday (April 25), Joseph took to his Facebook to push back against the criticism over the fact that the crowds at Saturday's concert did not appear to be adhering to social distancing guidelines and were not wearing face masks. He wrote: "Yesterday in Tompkins Square Park well over 2000 peeps came out. Free show for the People by the People. It was a blast! We raised $ for the FDNY Burn Unit, and fed people organic plant based eats.

"And let me say this - to all those talking shit. For the last year in NYC there were protests - tens and thousands of people in the streets - some rioting and looting engaging in bias attacks - on 4/20 weed day - thousands filled Washington Square Park - sharing blunts and weed pipes. Nobody said shit. This was our PROTEST - OUR RALLY. People who didn't want to come - stayed away. Good - nobody missed their ass.

"Wanna thank Cousin Joe and The Black-n-Blue crew for doing an amazing job. All the bands killed it THE CAPTURES, WISDOM AND CHAINS, MURPHY'S LAW, and the KINGS of NYHC MADBALL. PMA was had - smiling faces everywhere - we all needed this! I hope other cities do the same."

Yes initially I was told 2000 peeps then someone counting bodies said 3000 in the park - amazing day https://t.co/5bQsv3p3v0

Yesterday in Tompkins Square Park well over 2000 peeps came out. Free show for the People by the People. It was a blast!...

Yesterday, in NYC, both Washington Square and Tompkins Square parks were packed with people for live music - and the photos have everyone pretty much shoulder to shoulder with very few masks in sight. So that should be good for a spike in the virus in about two weeks.

This screenshot is from one of several videos on youtube showing the all day concert in Tompkins Square Park TODAY @NYCHealthCommr @NY1 @nypost @DailyMail thousands of people screaming, dancing, moshpit chaos, stage diving almost all the people with no masks, any concerns? pic.twitter.com/KyTh2FDkTb