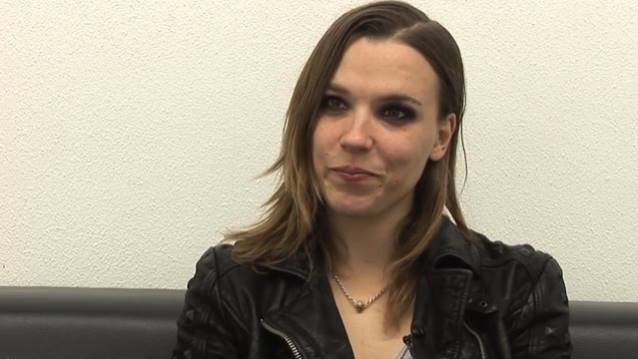 HALESTORM singer Lzzy Hale recently spoke to Music Radar about the songwriting process for the band's third album, tentatively due in late 2014 or early 2015. "It's exciting but it's such a mindfuck," she said. "We've just started to crack the code of what songs we want on the record.

"We're finishing that up after [the recent European] tour, then we'll finish the record, release it and do it all over again.

"It's a little stressful because we're under pressure to do something halfway decent and better than the last one. I'm just excited to get it out there and show people some new songs."

She added: "You write like 60 songs and most of that will be thrown away because you're chasing after the new thing that gets you excited.

"In the first batch of songs, we had this epic metal song, one song sounded like Tom Petty and then we had five piano ballads. Out of all of that, there were maybe three songs that we thought were cool and were the next direction we should go in, so we threw the rest away.

Regarding how the songs come together, Lzzy said: "There are many ways to skin that cat. If there is a piano in the room, I will probably go to that, because I don't have room for a keyboard with me backstage on tour. Lately I've been starting with lyrics first, oddly.

"I like to look back on the people who influenced my influences, and a lot of that is old-school blues and those players were incredible with barely any gear at all. Doing that gives you a different perspective.

"If it wasn't for METALLICA, I wouldn't have been introduced to MOTÖRHEAD.

"The other day I was thinking, 'OK, if Lemmy was a girl and played guitar, what would he do?' I wrote a couple of riffs with that in mind."