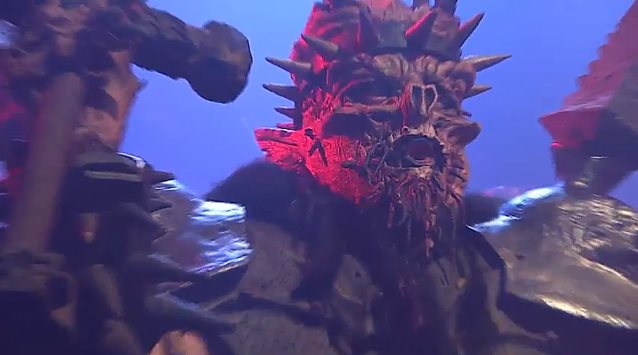 "Madness At The Core Of Time", the new video from GWAR, can be seen below. The song is taken from the band's new album, "Battle Maximus", which sold around 3,500 copies in the United States in its first week of release to debut at position No. 109 on The Billboard 200 chart. The CD — the band's first full-length studio effort since the loss of their longtime guitar player Flattus Maximus — was issued on September 17 on Metal Blade Records.

Commented GWAR frontman Oderus Urungus: "We made a video? I have been so busy touring, getting loaded and mouthing off, I didn't even notice. But I am sure it's the best video ever, simply because GWAR is in it."

"This album is both a tribute to Flattus and a telling of the next chapter in the story of GWAR," Oderus Urungus stated about "Battle Maximus". "The combo of the brand new album and show should satisfy even the most hardcore Flattus devotee with the fact that GWAR's slay-skills are as supreme as ever, and the band stands poised to embark on our most earth-shattering world tour yet. We have mourned, we have honored, and now it's time to fucking DEVASTATE in the name of Flattus and the supreme entity that is GWAR."

GWAR's "Battle Maximus" features twelve brand new tracks that not only honor their departed ally, but tells the story of GWAR's latest struggle against what may be their greatest enemy yet... the insidious "Mr. Perfect", who has travelled through time itself to steal the power of GWAR — the power of immortality, and use this power to mutate the human race into his twisted vision of what the "perfect" human should be. Once again GWAR finds themselves as the only thing standing between the human race and the latest super-powered shithead bent on the destruction of GWAR and the enslavement of their worshippers.