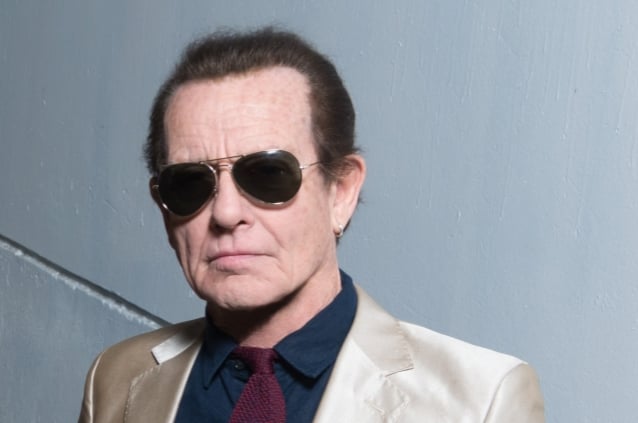 Dennis Gray of "The Australian Rock Show" recently conducted an interview with legendary vocalist Graham Bonnet (RAINBOW, ALCATRAZZ, MICHAEL SCHENKER GROUP). You can listen to the entire chat below. A few excerpts follow (transcribed by BLABBERMOUTH.NET).

On the RAINBOW song "Lost In Hollywood", which appears on the band's 1979 "Down To Earth" album:

Graham: "That's one of my favorite songs off the album, to be honest with you. Cozy [Powell, drums] came up with the beginning part, the drum thing in the beginning. Roger [Glover, bass] gave me an idea for the melody of the song. He just hummed something to me one day and said, 'Take that where you may.' I made up the melodies for that. I'm never credited for anything for that album. In fact, I never realized I was writing songs. It was Ritchie [Blackmore, guitar] and Roger that came up with the main lick and Cozy added his fantastic drumming to it. I was given a rough idea of how the melody should go, then I changed it around as I sang the lyrics to Roger Glover. That's how we did every track. We'd record one song probably about four different ways, different melodies, whatever, and the different words, and then we chose the one that was going the right way. We came up with the right idea for 'Lost In Hollywood' after about two takes, I think."

On still touring and recording at the age of 71:

Graham: "If I ever stop doing this, then I don't know what I'd do. I can't imagine not singing, ever. As hard work as it is sometimes, I moan about it: 'Oh God, really? We got to do all that? Oh geez. How long is the show?' The show we do with Michael Schenker is three hours long, but ours is one forty-five. But it's something I could never give up on. It's something that is in my blood. The day I give up is the day I drop down dead. I don't want that to happen anytime soon. I think I will keep going until I say to myself, 'Your voice is crap now.' So far, I've kept my singing voice pretty much the way it was when I was 30 years old."

On how Italian guitarist Dario Mollo stacks up against some of the other players Bonnet has played with:

Graham: "He's one of my favorite guitar players. He's written a couple of songs for the new ALCATRAZZ album. I've finished those two songs, melodically and lyrically, I finished those months ago. We're ready to record the new album now with ALCATRAZZ. He comes up with some great arrangements. I always like his playing. He's a great guitar player; he really is. I love him to death. Thank you, Dario. Not a lot of people know who he is, I know, but he's one of the people that is always there. He's always there for me, I know that. Even though a lot of people don't know who he is, when you find a great musician, I always want to work with them, no matter who they are, even Dario. [Laughs] He's a great player, really."

On which legendary guitar player made his jaw drop the first time he saw them play live:

Graham: "Yngwie [Malmsteen] was the first one because he was like a kid. He was a mere a child. He was about 19 when he joined ALCATRAZZ. I was just amazed how well he could play Ritchie Blackmore's stuff for a start; he was like a young Ritchie Blackmore. He wore the same clothes, the shiny black shirts and the shiny black pants, I should say, and Cuban heel boots, the whole thing. When he walked into rehearsal, I'll never forget it. We say, 'He looks like Ritchie. Let's see if he can play like him.' Then he blew us all away. I probably said a million times to people, but my favorite guitar player is Steve Vai. I loved the way he played so differently to other guitar players. He didn't show off too much. He was always a guy who was a bandmember who played within the song instead of playing the song or over-playing in the song. He was always someone who took the song seriously and added a bit of quality to the song when it needed it. Of course, Michael. Bob Kulick. They are all great players, but they're all so different. Bob is another one that can play anything, just about. I played with him recently in Vegas. We did a show and it was kind of cool to see Bob again after a few years. He's a great player. He really is. Chris Impellitteri. The fastest guitar player in the west. He's a great arranger, player. Again, so different because of the speed he plays from the other guys. There aren't many people that can play the way he does. He plays it pretty accurately. He's doing so many fast runs that sound like they don't mean anything at the time, but actually within the chord structure, a lot of guitar players play out of the chord structure and play what they like, but he's pretty much on the ball all the time for arrangements for a vocalist to write over."

The GRAHAM BONNET BAND released its latest album, "Meanwhile, Back In The Garage", last July via Frontiers Music Srl.