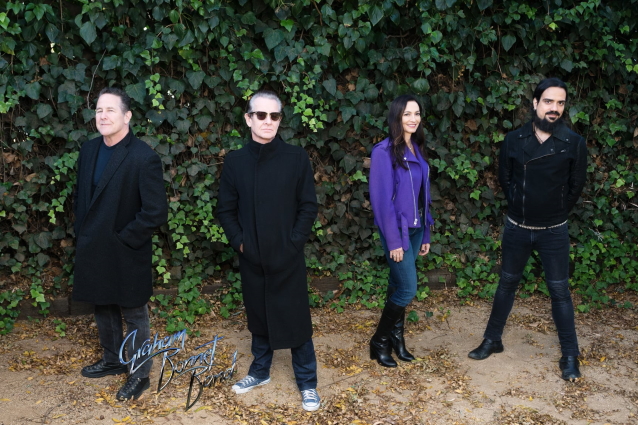 Graham Bonnet has announced that he is currently recording a new studio album with bandmates Beth-Ami Heavenstone (bass), Conrad Pesinato (guitar) and Mark Zonder (drums). In addition to the core band, some special guests will be lending their talents to the album, including legendary keyboardist Don Airey (DEEP PURPLE, RAINBOW). The names of more guests will be revealed in the coming weeks, so be sure to tune into Graham's social media to see those announcements.

Explains Bonnet: "Similar to the first two albums, it will reflect different eras of my career, but with a contemporary twist. Also, we have some heavy hitting guests including Don Airey and others yet to be announced. I'm very excited to be playing on an album with Don again. Aside from being my longtime friend and former bandmate, he is one of the most incredible musicians I have ever had the pleasure to play with. He's a 'real' keyboard player… a classically trained pianist. I'm also delighted to be playing with the original members of the GRAHAM BONNET BAND: Beth-Ami Heavenstone who has been my constant partner (on and off stage) since meeting back in 2012, guitarist Conrado Pesinato, whose innate musical style elicits some of my best songwriting, and the iconic Mark Zonder (FATES WARNING, WARLORD) on drums."

The album is anticipated to be released in summer 2021. Fans can follow Graham's social media for regular updates on the recording of the album.

Bonnet is a hard rock legend with a pedigree to back that statement up. His stints with RAINBOW, MSG, ALCATRAZZ and IMPELLITTERI prove he is one of the finest rock vocalists of his generation. The upcoming album will be the GRAHAM BONNET BAND's third release with Frontiers Music Srl, following the well-received and critically praised "The Book" and "Meanwhile, Back In The Garage".

Two years ago, Bonnet told Japanese journalist Masa Ito that he was glad to still be fit enough to survive the rigors of the road.

"Everybody's a baby compared to me," he said. "I will be 72 soon — a very old man. I'm okay — I'm doing good. I'm very happy to be in good health. A lot of my friends have died — a lot of people I've known have died over the past two or three years. I'm glad I'm still walking and smiling."

Asked by The Rockpit how he manages to keep his voice in such good shape, Bonnet said: "Keep smoking, keep drinking. No, no…. I quit drinking a while ago — well, a long time ago; about 15 years ago, something like that. I don't smoke, don't drink at all now, and I don't eat foods that will necessarily poison my body, irritate my throat. I try as hard as I can to be careful with what I do, but it isn't always there. Some days it's not always there, like today. I've just come off tour and I'm tired. I surprised myself in rehearsal yesterday, I thought I'd better go out and sing with the band, I'd just got off a plane, we're all rehearsing at the house here, and so I decided to go in and sing some songs and I kept on singing, and I thought, 'Blimey! My voice is still there after all this travelling and sleepless nights.' I've just been very lucky, I think. There's a lot of people at my age [who have] lost the lung power, and that's what it is. You really rely on your lungs to produce the notes. [It's] pretty obvious, but to hit the higher notes, to have the flexibility in the voice, [it] has to come through the air that goes through your body into the vocal cords, and if that's gone, you don't have the control. I've been very lucky in that I have my grandad's lungs. He had a huge chest, like a greyhound, and that's my build, pretty much. So, you just have to be careful not to stress, because sometimes stress can ruin the performances, we all know, and that's why people drink. 'Oh, God, I can't go on tonight. I can't face it.' But I've got past that, and I say, 'I think I can do this,' and I do, usually."