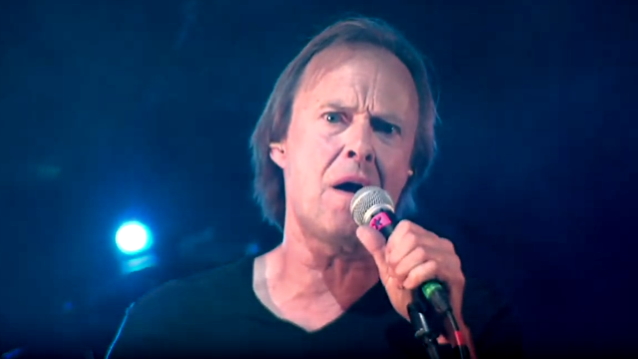 Swedish vocalist Göran Edman, who sang on two Yngwie Malmsteen studio albums, "Eclipse" (1990) and "Fire & Ice" (1992), reflected on the experience of working with the legendary axeman during an appeance on a recent episode of the the "80's Glam Metalcast" podcast.

"There [were] ups and downs," he said (hear audio below). "I'm glad I did it. It meant a lot for my career, to be on these two albums. I still have work because of doing these albums — I still have a career because of the reputation from those two albums. But as a person, he was kind of tricky — he could be very nice, and he could also be an asshole.

"Doing the first 'Eclipse' album and going out on a world tour, that was nice, but 'Fire & Ice' was like hell," he continued. "I had no inspiration. I didn't have the same sort of inspiration anymore, because he really wanted to be in charge this time. And it was a little bit of sloppy. During the recordings of 'Eclipse', he was never present — he was out drinking, partying and showing up late in the studio when we were all done, more or less. So the engineer was helping out a lot with the producing of the album and the harmonies and the choirs. I remember Yngwie thought that 'Eclipse' was overproduced — too many harmonies and everything. It shouldn't happen. On 'Fire & Ice', it should be a more raw and live feeling over the whole album and less production — that was his thought, anyway. So he tried to be more present and control the situation more."

Regarding his involvement in the songwriting process during his time with Yngwie, Edman said: "I was helping out with some melodies and lyrics. Sometimes he scribbled down something — some words here and there; this song is gonna be about this or that — and then I had to fill in the words. He just had the title for the song, more or less. I think I have credits for 12 songs. I even had to threaten to sue him to get the money — even if I had a contract and everything. It was obvious — black and white, written on the document. Nothing happened — I didn't get any money [at first]. Fortunately, in Sweden, we are very organized with the union and everything, so I was a member of the Swedish music association, and they helped me with an attorney, paid for everything. The process took three years or so before we got him to pay the money. If I would have paid for that, an attorney, myself, it would have cost a fortune. But the Swedish music association helped me to finance the whole process."

Göran also commented on the fact that Yngwie's recent albums have featured music and lyrics written solely by Malmsteen, with the guitarist handling most of the lead vocals himself.

"The lesson he learned from all these things, with attorneys and everything, was that 'never let a vocalist make a melody again or write a lyric again, because then everything is getting out of my hands,'" Edman said. " I think his empire is controlled by him and his wife now, so he's trying to distance himself from the rest of the band, more or less. He mentioned that to us in the old times too, that we are just cattle [laughs] driving on a bus, and that nobody would ever notice if we quit the band or not because they are all focused on his guitar playing and on him as the artist. So we are supposed to do what we are told to do and shut up, more or less [laughs] — that was his attitude from the beginning. And now he finally established that kind of rule. [Laughs]"

Four years ago, Jeff Scott Soto, who sang on Yngwie's first two albums, 1984's "Rising Force" and 1985's "Marching Out", engaged in a war of words with the Swedish guitarist over the fact that Malmsteen claimed in an interview that he "always wrote everything," including the lyrics and melodies, and simply hired various vocalists to sing his material. Soto told the "US American Made Guitars" show that "it's false information" to suggest that he contributed nothing to Yngwie's early albums "because we co-wrote [some of] those songs together. I actually authored those songs," he said. "For him to say, 'I wrote every lyric, every melody,' it's absolute falsity. And he's speaking out of whatever anger or whatever throwaway conversation he might be having, but when it's put on text, it comes across as very crude and very arrogant. So, of course, I don't take that kind of stuff too personally."

In the days after Yngwie's original interview with Metal Wani was published on BLABBERMOUTH.NET, several of the guitarist's other former singers — including Joe Lynn Turner and Tim "Ripper" Owens — responded on social media, with Turner describing Malmsteen's statements as "the rantings of a megalomaniac desperately trying to justify his own insecurity." This was followed by a retort from a member of Yngwie's management team, who wrote on Malmsteen's Facebook page that the three vocalists "came out enraged, spitting insults and profanities" at the guitarist because "Yngwie said something that they didn't like." The management representative added: " It's very unfortunate that these past hired vocalists must resort to mudslinging and insults to elicit any kind of media attention towards them. Such classless, puerile words are ungentlemanly at best and absolutely disgraceful at worst."