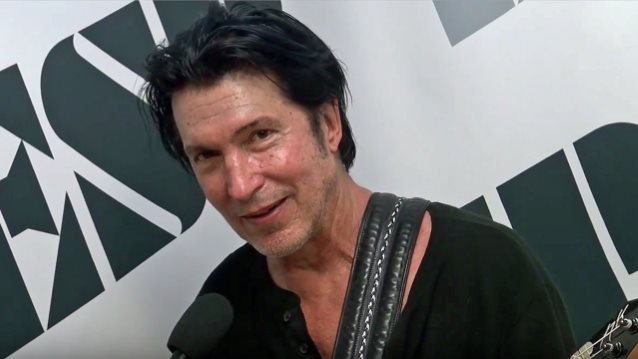 Sayaka Shiomi conducted an interview with legendary guitarist George Lynch (DOKKEN, LYNCH MOB, KXM) at this year's NAMM show, which was held January 19-22 at the Anaheim Convention Center in Anaheim, California. You can now watch the chat below.

Speaking about the reunion of DOKKEN's classic lineup for six shows in Japan last fall, George said: "It went really well, and it was a lot of fun. A lot of the fans were really moved, emotionally, by seeing us together again, so it was very humbling to see that. I saw a couple of people even in tears. So, it was nice to be a part of that."

Lynch also talked about the upcoming DOKKEN concert DVD, which will feature footage from two of the Japanese shows — including Tokyo — as well as the band's very first comeback gig, which was held on September 30, 2016 at Badlands Pawn Guns Gold And Rock 'N' Roll in Sioux Falls, South Dakota. He said: "Well, I would guess — and don't hold me to this — but I'm guessing it'll be out in the early fall of 2017. Because we're still doing the business, and there's still work to do to get it prepared. All the editing hasn't even been started yet, so we have to do all the editing."

Lynch, singer Don Dokken, bassist Jeff Pilson and drummer "Wild" Mick Brown launched the Japanese tour on October 5 in Osaka, before heading to Fukuoka, Tokyo for an appearance at the Loud Park festival and continuing on to Hiroshima, Aichi and finally, back to Tokyo for the final show on October 12.

Pilson told "Trunk Nation" that the Japanese tour was "very, very drama-free; I was kind of surprised — very pleasantly so. It was a great time," he said. "We actually had a lot of fun. We connected on a friendship level that I wasn't really expecting, to be honest with you, and it was great. I mean, it was really, really fun — much more so than I was expecting."

Pilson also talked about the fans' reaction to seeing the classic lineup of DOKKEN perform again. "It was pretty spectacular," he said. "You could feel it. We would meet-and-greets for a lot of people that were… It was a wonderfully warm feeling, and you could feel it all the way through the crowd. And I've gotta say, it was really great."

Although DOKKEN had originally intended to perform a brand new song at the Badlands Pawn Guns Gold And Rock 'N' Roll concert and at the Japanese shows, those plans were eventually abandoned. "Honestly, the two of us [George and I] never really anticipated us playing it live," Pilson explained. "And then we talked it over with everybody, and that didn't really make sense. The song is partially recorded, it's mostly written, so the plan is to release it as a piece of bonus material for the DVD that we put out [later this] year."

Don recently told Billboard that the main reason he doesn't want to continue with the classic DOKKEN lineup is that "loves" the band he has now — which features Brown, alongside longtime guitarist Jon Levin and bassist Chris McCarvil. "We've been together for 13 years, and I don't want to hurt that franchise," he explained. "Plus if we were to continue with [the classic] lineup, old wounds might be opened, and I don't want to revisit that. I don't think any of us wants to. It's all great when a marriage fails and you say, 'I'm gonna get back with my ex' — for a week, maybe. Six months into it, the wounds come back. I don't want to experience that. It's just not part of my life anymore, and I think the other guys feel the same way."