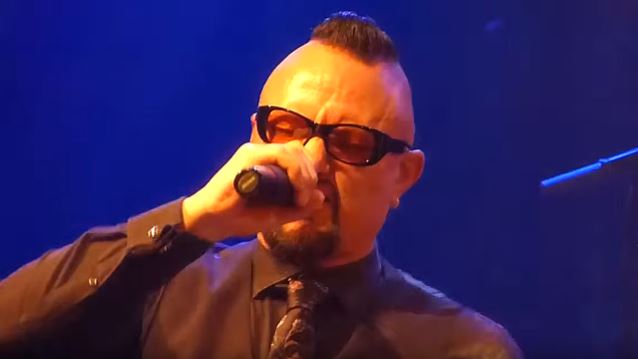 On February 3, OPERATION: MINDCRIME, the new band led by former QUEENSRŸCHE singer Geoff Tate, will hit the road for over thirty dates on what will mark the group's first major U.S. tour of the year. This comes hot on the heels of OPERATION: MINDCRIME's extensive European tour in November and December that took them to such countries as Austria, Bulgaria, Croatia, Czech Republic, Estonia, Finland, France, Germany, Hungary, Italy, Netherlands, Poland, Slovakia, Switzerland and the United Kingdom. The trek was the band's first in support of its debut album, "The Key", which came out in September 2015.

For the forthcoming U.S. tour, Tate will be joined by several of the stellar musicians and bandmates who performed on "The Key", including guitarists Kelly Gray (QUEENSRŸCHE) and Scott Moughton, drummers Simon Wright (AC/DC) and Scott Mercado (CANDLEBOX) and keyboardist Randy Gane (MYTH).

What can fans expect on this tour? The unexpected. Tate says: "I plan to play songs from 'Empire', 'Operation: Mindcrime' 1 and 2, 'Rage For Order' and my new album, 'The Key', along with favorites from all the other albums I recorded under the name QUEENSRŸCHE." He adds: "My band's name may have changed but the songs remain the same."

OPERATION: MINDCRIME will wrap up the initial leg of their tour in Tate's hometown of Seattle, Washington with a performance at The Neptune on March 18.

"The Key", the first album of an ambitious trilogy from OPERATION: MINDCRIME, sold around 2,500 copies in the United States in its first week of release.

Asked if it was a challenge to write a song that could be released as a single and stand alone without the context of the other songs while composing the material for "The Key", Tate told Rock Confidential: "Yeah, it is. I never think in terms of singles. I have never picked a single on any record I've ever done. That's always been a collective decision. It's strange what people pick and their reasons for picking a song to be a single. Not that singles matter anymore, because we're not being played on radio stations. That was a real epiphany I had a while back. For so many years and so many records I've always thought in terms of adhering to the commercial radio format of songwriting arrangements. I realized that radio stations don't really exist anymore — not the way we grew up with them. So I can do anything I want musically. I can write a six-minute track. I can wait two minutes before I get to a chorus. That was a real revelation to me and it really influenced a lot of the writing on this record. I've had some of the craziest things come up when discussing singles with record labels. When [QUEENSRŸCHE's] 'Operation: Mindcrime' [album] first came out, the record label wanted to release 'Suite Sister Mary', a 10-minute-long song, as a single to radio. I said, 'What's your reasoning behind this?' They wanted to break the song into three separate pieces and release three separate singles of the same song. That's just bizarre. People get these ideas — something grabs them and they get inspired by a song and want to do something with it. You never know as a writer how your stuff is affecting people. Everybody hears and experiences music differently."