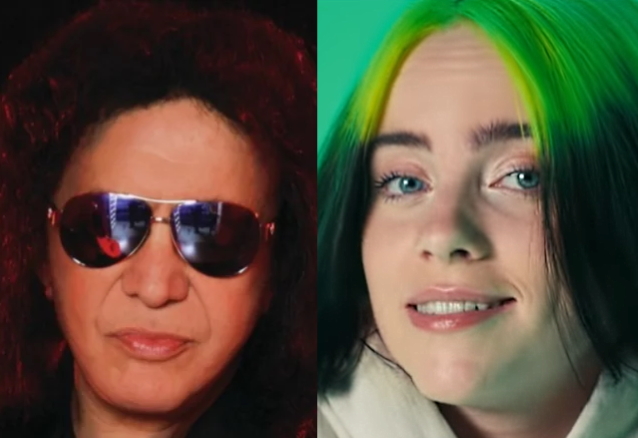 KISS bassist/vocalist Gene Simmons says that he was "blown away" by "The World's A Little Blurry", the Apple TV+ documentary about singer-songwriter Billie Eilish's rise to global superstardom.

Just a few short years after launching her career by releasing songs with her brother on the Internet, Eilish has become one of the music industry's biggest stars, and even took home the 2020 Grammy Award for "Best New Artist".

On March 12, Gene took to his Twitter to write: "Have to say I was blown away by the @billieeilish Docu. A unique and original artist. Her brother @finneas is a major talent, multi instrumentalist and producer. Catch the Docu #TheWorldsALittleBlurry . You will love Billie Eilish."

"Billie Eilish: The World's a Little Blurry" debuted on Apple TV+ on February 26. The documentary is available to all Apple TV+ subscribers to watch on demand.

From award-winning filmmaker R.J. Cutler, "The World's A Little Blurry" offers a deeply intimate look at this extraordinary teenager's journey, at just 17 years old, navigating life on the road, on stage, and at home with her family, while writing, recording and releasing her debut album "When We All Fall Asleep, Where Do We Go?

Simmons previously praised Eilish last December while speaking to Gulf News about rock's supposed diminishing status. Claiming that he loves all the contemporary pop artists, Gene said: "I think Billie Eilish is fantastic. She's interesting because she and her brother actually write the material and are unique to themselves."

Have to say I was blown away by the @billieeilish Docu. A unique and original artist. Her brother @finneas is a major talent, multi instrumentalist and producer. Catch the Docu #TheWorldsALittleBlurry . You will love Billie Eilish.