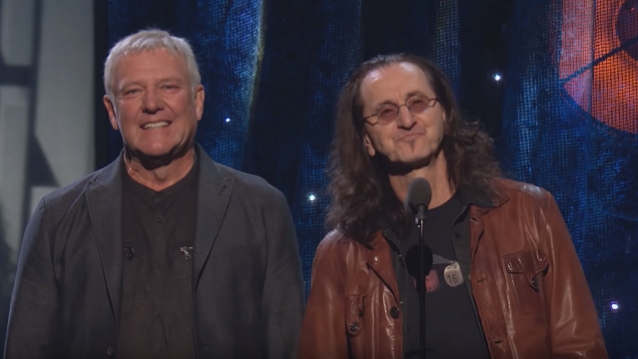 Having played the bass guitar for over four decades, Lee has spent years collecting hundreds of vintage bass guitars. The sizeable collection turned into the impetus behind Lee's new book, "Geddy Lee's Big Book Of Beautiful Bass", and the Rock Hall's Rush Fan Day, which features a new exhibit of Lee's basses, a Hall Of Fame Series interview with Lee hosted by bandmate Alex Lifeson, a book signing with Lee, and a rebroadcast of RUSH's Hall Of Fame induction.

Tickets are $100 for Rock Hall members and $125 for non-members and will be available at ticketing.rockhall.com. Tickets go on sale to Rock Hall members at 10 a.m. EST on Thursday, January 10, and non-members at 10 a.m. EST on Friday, January 11. There is a two-ticket limit per transaction. Each ticket includes a copy of Lee's new book ($75), access to the Hall Of Fame interview and book signing, a commemorative credential, and access to the Rock Hall's exhibits, including the new Geddy Lee bass guitar exhibit.

Fans can join Geddy Lee for a Hall Of Fame Series interview hosted by bandmate Alex Lifeson on the Klipsch Audio main stage as they discuss Lee's bass collection and RUSH's induction into the Rock And Roll Hall Of Fame. The interview will also be live streamed on the Rock Hall's Facebook page where fans can submit questions directly during the question-and-answer session. Fans can also hear the complete interview on several SiriusXM channels throughout January including Classic Rewind, Rock And Roll Hall Of Fame Radio and Volume, and anytime on SiriusXM On Demand.

Available to event ticket holders only, tickets for Rush Fan Day include a copy of Lee's new book, "Geddy Lee's Big Book of Beautiful Bass", and access to an exclusive book signing with Lee only. The 408-page, coffee table-style book documents the history and characteristics of Lee's basses from 1968 to 2017, including mainstream Fenders, Gibsons and Rickenbackers to more obscure and lesser-known treasure in his collection. It features interviews from other musicians, including LED ZEPPELIN's John Paul Jones, U2's Adam Clayton, METALLICA's Robert Trujillo, PRIMUS's Les Claypool and WILCO's Jeff Tweedy, and includes a graphic timeline of the bass guitar.

The Rock Hall's Shine A Light exhibit will showcase some of Lee's globe-spanning bass guitars and the stories behind them.

All Day - RUSH Induction Footage from the Vault

As a special addition, RUSH induction footage from the Rock Hall's vault will be shown throughout the day in the Museum's Forest City Theater.