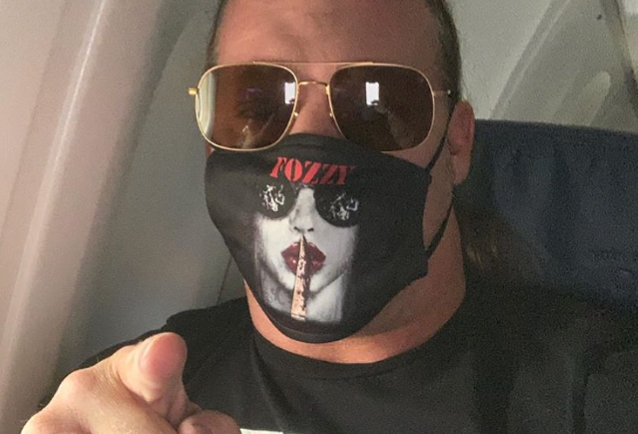 FOZZY is putting the finishing touches on its new studio album for a 2021 release.

On Tuesday (October 27), FOZZY frontman Chris Jericho posted a photo of him sitting in an airplane, apparently on his way to the recording studio in Atlanta, and he included the following message: "It's time to finish up this new rock n roll record.... #OneSongLeft #Fozzy2021 @fozzyrock".

Chris recently revealed that FOZZY's next LP will contain 12 songs, including one cover. During the July 25 episode of his "Saturday Night Special" weekly live series, he said: "It's our best album ever by far, and I can't wait for you guys to get a chance to hear it. And we're gonna start recording vocals… We did four songs of vocals already. And one of the songs is called 'Ugly'. There you go. U-G-L-Y. You ain't got no alibi. That's all I'm saying."

This past May, Jericho told Australia's Triple M radio station that FOZZY has "so many great songs" written for the new LP that "it's gonna be hard to pick the singles."

Guitarist Rich Ward and producer Johnny Andrews are once again "doing the lion's share" of the songwriting for the new LP, which is being recorded primarily in Atlanta, Georgia.

Earlier this month, FOZZY announced the "Capturing Judas" livestream, set to take place on Saturday, November 14, 2020 at 9 p.m. EST on Veeps.com. The band will appear in its first global live streaming event from Madison Studios in Atlanta, Georgia. Tickets, tee shirt bundles, and VIP Virtual Meet & Greet packages are on sale now at FOZZY.veeps.com. Additionally, fans who purchase "Capturing Judas" will be able to watch the livestream or watch on demand until November 29. For more information, visit CapturingJudas.com.

The event, aptly titled "Capturing Judas", is a journey through the band's "Judas" touring cycle. The pre-show will begin with the special world premiere of "Fozzy Across America", filmed October 13, 2017, the day FOZZY celebrated the release of "Judas" by performing three shows, in three different time zones, on the same day. This 30-minute documentary pulls back the curtain to provide unprecedented, behind-the-scenes access to the band as you've never seen them before. Following "Fozzy Across America" is the final live performance of the "Judas" set that was performed in over 200 cities around the world and will include stories of the road.

"After having to postpone our 'Save The World Tour' multiple times due to the continuing lockdown, we decided we wanted to do something special for all of our fans worldwide who rocked with us over the past three years on the 'Judas' tour cycle!" stated Jericho. "So, on November 14, we will be coming at you LIVE without a net, to play some kick-ass rock 'n' roll for you all! We're also gonna tell you some fun road stories, have a few drinks and maybe even do some Riverdancing! So come join us and let's all celebrate and commemorate the most successful album and tour of FOZZY's career."