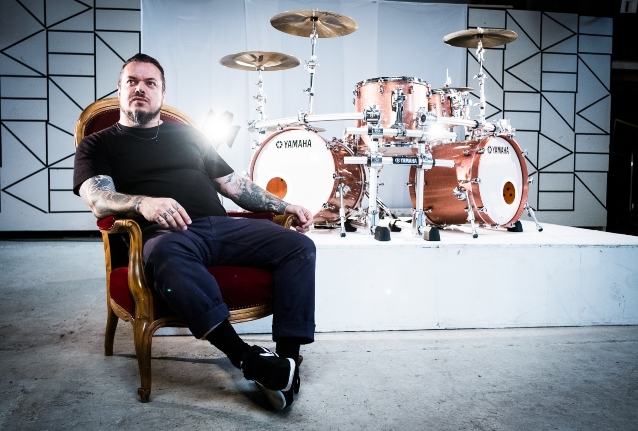 Former SEPULTURA drummer Igor Cavalera has teamed up with Yamaha for a brand new drum setup, ready to hit the stages in the coming years.

Igor rocketed to fame as one of the most influential drummers from the mid-'80s thrash metal scene, when his aggressive, energetic playing on the first SEPULTURA records hit the taste of fans worldwide, leading the young band from Brazil to becoming pioneers of this genre.

Following the band's raw energetic first releases, their follow-up records "Chaos A.D." and "Roots" revealed Igor's unique tribal rhythms, that marked his drumming style and contributed to the band's worldwide success, making SEPULTURA one of the era's few bands that managed to increase its worldwide fan base unimpressed by the many trends that came and went around them.

For his various projects, Igor has decided to make Yamaha his instrument of choice.

"One of my first drum kits was a Yamaha, back in the '80s, and it was one of my favorite sounds," Igor said. "So from that moment, I always had a special place for Yamaha."

In search of a versatile kit that suits his various projects, Igor will make the Yamaha Absolute Hybrid Maple kit his sound for future shows and recordings. Solid manufacturing, warm and punchy tone with lots of sustain, it delivers the natural drum sound Igor has been searching for. "For me, that's what it is about," he said. "I don't wanna have to push tons of effects to make my drums sound good."

With a Pink Champagne Sparkle finish and his lowrider-inspired setup, this kit will also be an optical eyecatcher on stages worldwide.

In a recent interview with Drumtalk, Igor talked about when the tribal and percussive elements started making their way into SEPULTURA's sound. "To get where we were at the 'Roots' time, it actually started on 'Arise' by experimenting very little on some intros where we wanted to have some weird kind of like 'jungle noises' and things like that," he said. "And once we saw some of that could be mixed with more of like a harder, metal, hardcore, whatever sound, on 'Chaos A.D.', we did a little more experimenting and I actually started to incorporate more of the tribal beats using more toms and things like that. Then we did one acoustic jam during 'Chaos A.D.'. After that, we were prepared to do 'Roots' and that's where I think we just dove straight into the whole thing."

He continued: "For me as a drummer, I have to say, I felt a lot more comfortable playing stuff like I did on 'Roots' or even on 'Chaos A.D.', then maybe on 'Beneath The Remains' when I was trying super-hard to be this thrash drummer. When I started playing the drums, I started playing Samba and Brazilian rhythms. For me, it was a lot easier to incorporate and by doing that, I somehow created my own sound, my own style of mixing those things.

"I have to say, in the beginning, it was a lot harder, because I was, like, 'I have to do the double-bass super-fast' or whatever band I wanted to emulate and things like that," he added. "Later, when I was doing stuff that was more tribal and I was, like, 'Wow, that's my thing. I don't need to emulate anyone.' It was just throwing my crazy ideas into the drums. It was cool because somehow, very early on 'Roots', it became almost like a concept record. Every song had an experimental direction to it. The more we did it, it became, I don't know, for me as a musician, it was probably the most incredible thing that I did which was recorded with the tribe. Going to record with the Xavantes tribe, which is a tribe that has no drums, that was something that was very interesting. All they do is voices and some percussion where they put some stuff on their body so when they shake, there's a bit of it, then stomping on the ground. There's no drums. I brought a few percussion instruments there, so I was very free to do some drumming. For me, that was one of the highlights of my career, to go to Brazil and make music with them."