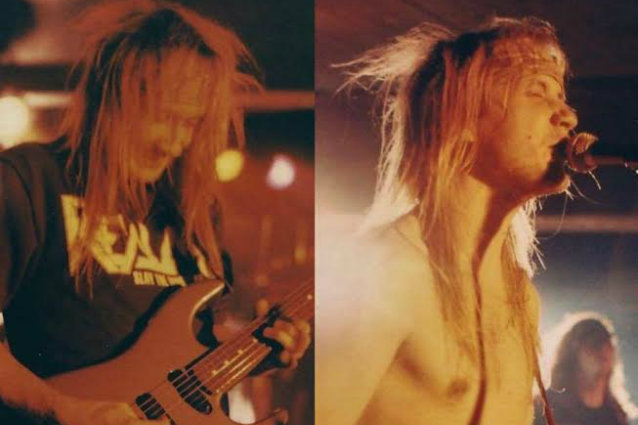 Paul's former REALM bandmate Takis Kinis (guitar) paid tribute to his bandmate, writing on Facebook: "It is with a very sad and heavy heart that I share with all of you the passing of Paul Laganowski.

"Nine months ago, Paul was diagnosed with pancreatic cancer. Per his wishes, we kept the illness private. He put up a hell of a fight and retained his optimism and sense of humor right to end. Now he is finally free of pain and suffering. And that for that I am thankful.

"Most of you remember Paul as the guitarist of our bands REALM and WHITE FEAR CHAIN. Through music he touched many people. His legacy will live on. Those of us who were privileged to get to know him as a friend, knew how truly special he was. He was one of those rare few good souls you couldn't help but love. I feel honored to have played music with him and to call him my best friend.

"Paul, as you cross over to the other side, know that you are loved by many and that you will be missed."

A memorial service for Paul will be held on or near his birthday on April 7.

Formed in 1985, REALM released two underground demo tapes — "Perceptive Incentive" in 1985 and "Final Solution" in 1986 — before landing a deal with Roadrunner Records in 1988. The group's debut album, "Endless War", came out later that year and contained a cover version of THE BEATLES' song "Eleanor Rigby" which REALM converted into a metal classic. In 1990, REALM issued its second album, "Suiciety", featuring a more unique progressive sound than the band's earlier releases.

After completing their contract with Roadrunner, REALM recorded another album's worth of material, but it remains unreleased to this day. In 1992, REALM disbanded.

"Endless War" and "Suiciety" were digitally remastered and re-released via the Metal Mind Productions label in 2006.