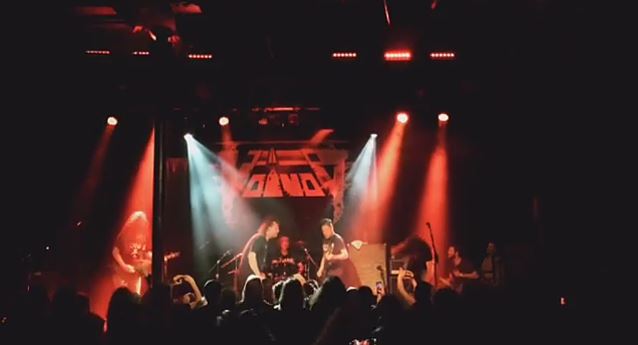 Canadian metal innovators VOIVOD were rejoined by their former bassist Jason Newsted during their June 8 concert at Slim's in San Francisco, California. Fan-filmed video footage of his appearance can be seen below.

Newsted joined VOIVOD in 2002 and served as producer for the metal legends' self-titled album in 2003 on the Chophouse Records label (in association with Surfdog Records).

Longtime friends and pioneers of metal music, Newsted and original VOIVOD vocalist Snake (a.k.a. Denis Belanger), guitarist Piggy (a.k.a. Denis D'Amour), and drummer Away (a.k.a. Michel Langevin) first began working together at Newsted's Chophouse studio in 1995, intent on keeping the music alive between busy touring schedules. However, with Newsted's departure from METALLICA in January 2001, he was free to join VOIVOD as a full-fledged member and would remain involved with the group until 2008.

Jason in February 2014 canceled an appearance at Australia's Soundwave festival with his NEWSTED project, citing "private and personal circumstances." The cancelation followed more than a year of intense touring and promotional activity surrounding the release of NEWSTED's "Metal" EP and follow-up album, "Heavy Metal Music", both of which were positively received by the critics and fans alike.

In September 2014, Newsted announced that he was no longer on "Twitter, Instagram, Facebook or any other social networking web site" and added that he had "no affiliation with any such impostor sites using his name or likeness unlawfully."