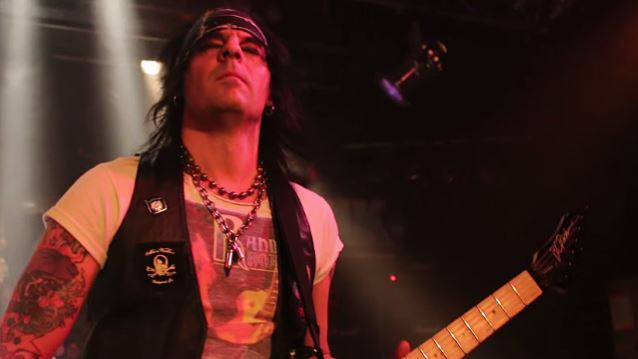 Former L.A. GUNS guitarist and "Let It Rawk" creator and producer Stacey Blades has launched a new band called ATOMIC RADIO. The group, which is rounded out by Adam Kury from CANDLEBOX on bass, Micheal O'Mara from PYROMANIA and TALON on lead vocals, Johnny Rude on drums, and Jeff Cohen on guitar and keyboards, plays a raucous set of classic rock spanning from the mid-'70s to early '80s, performing hits and guilty pleasures from such artists as AEROSMITH, WHITESNAKE, SCORPIONS, CHEAP TRICK, FOREIGNER, THE CARS, DEF LEPPARD and more.

Says Blades: "We'll be introducing a few originals into our set as well.

"The band is looking to debut in late winter in Vegas and nationally at casinos.

"'Let It Rawk' is still my baby but this will be a really cool project!"

Stacey's ten years with L.A. GUNS cemented him as a must-watch guitar player, and his final record with the band, "Hollywood Forever", earned him critical acclaim for his exceptional fretwork. He left the band in 2012 to pursue his other projects, including "Let It Rawk", which is described in a press release as "a loud, colorful, energetic and interactive experience of the hair metal era on L.A.'s Sunset Strip."