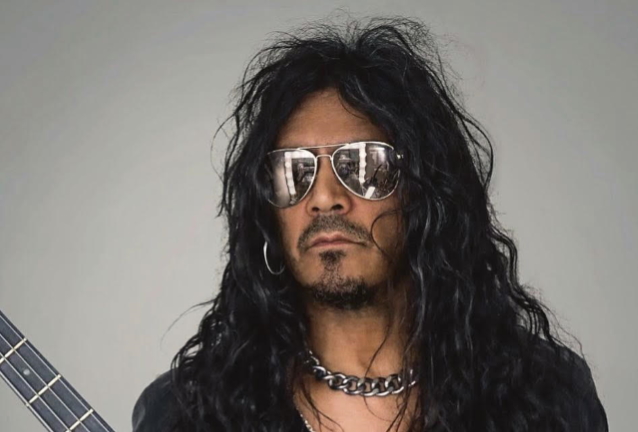 Former KING DIAMOND bassist Hal Patino says that he would be open to taking part in a reunion tour featuring the surviving members of the band's original lineup.

Patino made the comment just days after Mikkey Dee, who played drums for KING DIAMOND from 1985 until 1989, said that he would also like to see such a tour come to fruition.

Hal said: ''I think it would be fun to do a 'Them' reunion tour. Just one tour for the fans!'

"We are all still here and I think it would be really cool getting back together after all these years.

"I still talk to Mikkey Dee and Pete Blakk [former KING DIAMOND guitarist], and I talked to King [Diamond, the band's frontman and namesake] not long ago.

"We were a great band back then and we had a very powerful and unique sound. We all sound just as good today, if not better, and it would cool for all the old and new fans to hear, see and feel it for one last time.

"I recently talked to Mikkey and Pete about it. But it's all up to King."

Dee expressed his interest in a KING DIAMOND reunion while speaking to Cassius Morris of "The Cassius Morris Show" earlier this week. He said: "Unfortunately, [original KING DIAMOND bassist] Timi Hansen is dead, but you could have Andy [LaRocque, guitar], Michael Denner [guitar], you could have Hal Patino, Pete Blakk, myself, just for a tour, and only play the stuff that we did — from 'Fatal Portrait' to 'Cospiracy'. That could have been a really fun and successful tour."

Dee, who has been a member of SCORPIONS since 2016, went on to say that it's "totally up to" King Diamond as to whether such a tour will ever take place. "Because he [also] does MERCYFUL FATE [on the side]," Mikkey said. "I don't see why not. If I'm off [and not doing anything] with SCORPIONS, then I could easily have done that. That would have been so much fun, I think, because we were a great bunch of guys. And I still talk to Andy and Pete and Hal and King as well."

Patino played bass for KING DIAMOND from 1988 to 1990 and once again from 2001 to 2014, at which point he was fired from band and replaced with Pontus Egberg.

Back in July 2014, Patino released a statement calling KING DIAMOND's frontman and namesake "a tired, bitter, old man" and denying that he has a drug problem, despite the singer's implications to the contrary.

After King announced Hal's exit from KING DIAMOND, Patino posted a message of his own claiming that he was offered a "totally ridiculous" salary for the band's five shows that summer, calling the move "disrespectful" and insisting that he quit the band in disgust two days before King announced Patino was "relieved of his duties" as the bassist for KING DIAMOND. King then responded with a lengthy posting on his Facebook page, accusing Patino of "putting out extreme lies" about King's character and slamming Hal for asking for more money at the last minute after the rest of the band and the crew already accepted the same salary as they had received for the 2013 European tour.