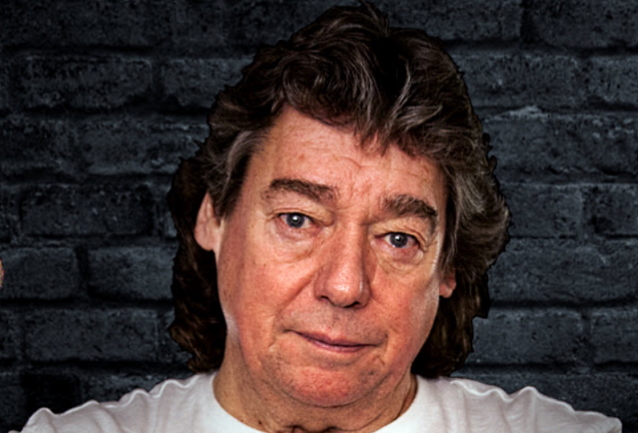 Former IRON MAIDEN guitarist Dennis Stratton has once again commented on the band's nomination for the Rock And Roll Hall Of Fame's class of 2021. The top vote-getters will be announced in May and inducted in a Cleveland, Ohio, ceremony in the fall.

According to the Hall Of Fame, the IRON MAIDEN members that would get inducted include the current lineup of singer Bruce Dickinson, bassist Steve Harris, drummer Nicko McBrain, and guitarists Adrian Smith, Dave Murray and Janick Gers, along with Stratton, former singer Paul Di'Anno and former drummer Clive Burr.

Asked about the fact that former IRON MAIDEN singer Blaze Bayley, who fronted the band from 1994 until 1999 and appeared on two albums, "The X Factor" and "Virtual XI", was not included in the list of members who will enter the Rock Hall should MAIDEN get inducted, Stratton told the "Uncle Steve's Iron Maiden Zone" podcast (as transcribed by BLABBERMOUTH.NET): "Well, when I first heard that he wasn't included, I was a bit shocked and a bit… I don't know. It was weird. Why? Why wasn't he? Now, I know for a fact he was with them for five years and two albums, and he contributed a hell of a lot to them two albums. But people told me that it's something to do with the committee that run this Rock And Roll Hall Of Fame. It has to be certain years, involved with so many years. So I don't actually know. Someone would have to read the rules to me. But I definitely think it's heartbreaking not to be included."

Stratton went on to say that for him to be nominated for the Rock Hall is "one of the biggest honors" of his career. He added: "Now, I didn't know Bruce had said anything [negative] about the Hall Of Fame. Someone told me that he had said a few things about the Hall Of Fame. I don't know what he said. But I know that he said something. Now, personally for me, I was blowing my own trumpet, saying, 'Please vote.' 'Cause this is a big honor for me; it means the world to me. But I'm not speaking for the band; this is me personally. Now, if the band and the management don't fancy it or it's not their scene and they're not interested, then so be it. You have to respect the band or the management's decision.

"I've watched the [fan] voting on my phone, and I see the voting, which is from Tina Turner and the top one — I don't know who that is — and the FOO FIGHTERS, the voting is quite mediocre," he continued. "Now, I know for a fact that I can talk personally for me, not for MAIDEN, but the amount of fans in this world — not only South America — the amount of fans in the world, if they voted for IRON MAIDEN, that wouldn't be hundreds of thousands, that would be millions. And MAIDEN would [win the fan vote] — they would [win] it without a problem. But because [MAIDEN has] stayed quiet [about it and not publicized the nomination], if it's not their scene, then you have to respect the management, respect the band and say, 'Good luck to you guys.' And if they're not interested, then so be it. But for me, it is a big honor. And that's what you have to go along with."

Stratton was a member of MAIDEN for less than a year, but he nonetheless made a vital contribution to the band's classic first album.

To be eligible for this year's ballot, each nominee's first single or album had to have been released in 1995 or earlier.

A voter pool of more than 1,000 artists, historians, journalists, and members of the music industry will select the new class. Fans also have a chance to take part in the process by voting at Rockhall.com or at an interactive kiosk at the museum in Cleveland. Their selections will count as a single "fan ballot" that gets tabulated along with the others.

Dickinson made headlines in 2018 when he referred to the Rock Hall as "an utter and complete load of bollocks" during a spoken-word gig in Australia, insisting that the Cleveland-based institution is "run by a bunch of sanctimonious bloody Americans who wouldn't know rock and roll if it hit them in the face."

Bruce later told The Jerusalem Post that he was "so annoyed with that coverage because they took my statement out of context to make it seem like I was upset that we weren't in the Hall Of Fame.

"I'm really happy we're not there and I would never want to be there," he continued. "If we're ever inducted, I will refuse — they won't bloody be having my corpse in there.

"Rock and roll music does not belong in a mausoleum in Cleveland," Bruce added. "It's a living, breathing thing, and if you put it in a museum, then it's dead. It's worse than horrible, it's vulgar."

Two years ago, Harris said that he didn't care that IRON MAIDEN has yet to be inducted into the Rock And Roll Hall Of Fame despite the fact that it has been eligible since 2004.

"I don't mind that we're not in things like that," he told Rolling Stone. "I don't think about things like that. It's very nice if people give you awards or accolades, but we didn't get into the business for that sort of thing. I'm certainly not going to lose sleep if we don't get any sort of award, not just that one, any award. I don't think we deserve to have this or that necessarily. With what we do, whatever comes of it is great. Whatever doesn't come of it is great, too."

Harris previously said that he wasn't concerned about whether IRON MAIDEN will eventually be inducted into the Rock Hall. "I don't really think about it, to be honest. I think awards are things that are nice to have when you get them, but it's not something you're really striving for — it's not what it's about it," he said. "It's never been about that. It's aways been about just trying to make good music and go out and play good live shows, and that's it, really. Hopefully people will appreciate it. It's probably nice when people give you awards — don't get me wrong; I think it's great — but it's not something that you would lose sleep over if you didn't get any.

Having been eligible for induction for more than a decade and a half, IRON MAIDEN is one of the biggest bands on the planet. Since the release of their self-titled debut album, the British heavy metal legends have released a further 15 full-length studio records, and sold over 100 million copies.