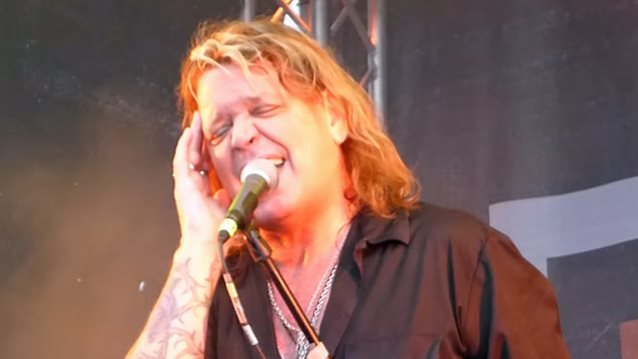 American singer David Reece, who fronted ACCEPT in the late '80s, says that he is "proud" of the album he made with the band, even though he initially "hated everything about it."

The current SAINTED SINNERS vocalist was recruited for ACCEPT's "Eat The Heat" LP in 1989 following the departure of Udo Dirkschneider. Reece's higher-pitched delivery was in sharp contrast to Dirkschneider's distinctive style, and overall, the album was a critical and commercial disappointment,

Midway through the "Eat The Heat" tour, differences between the band and Reece had come to a head, leading to the altercation between the singer and bassist Peter Baltes in Chicago. By the end of 1989, ACCEPT had hung it up.

Asked by Canadian rock journalist Mitch Lafon of the "One On One With Mitch Lafon" podcast (Facebook page) if he is proud of "Eat The Heat", Reece said (see video below): "You know what? It's weird, because the bad blood happened at the end of it, and I hated it — I hated everything about it. I knew it opened a bunch of doors for me, but… I, on a daily basis, get people telling me what that album means to them now. At the beginning, they hated me, but now it's, like, they have this rebirth of how great it is. And I listened to it the other day, and I went, 'That's a pretty dang good album for a first.'"