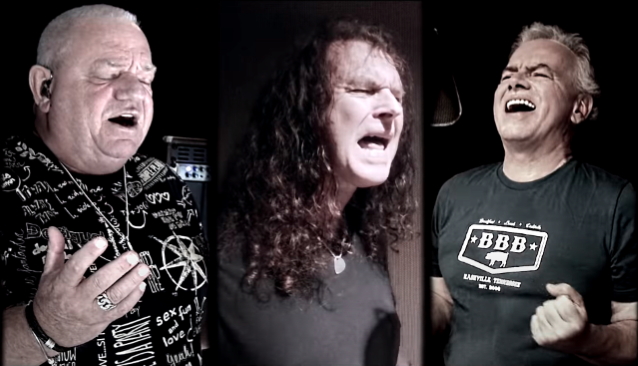 Former ACCEPT members Udo Dirkschneider, Stefan Kaufmann and Peter Baltes recently reunited in the studio to record a song called "Where The Angels Fly" as a tribute to the frontline workers who have protected others from the pandemic and put their own health at risk in doing so. The official music video for the track can now be seen below.

Back in May, Baltes stated about "Where The Angels Fly": "About a month ago Stefan & I where asked to write a song for Germany's Musikkorps to say Thank You to the frontline workers all around the world who have been risking their lives day in and day out during the Corona crisis.

"These are certainly challenging times and we are all affected one way or another.

"Let's salute all those who ran into the fire saving lives. They are the true angels."

"Where The Angels Fly" recording lineup:

This past July, Udo ruled out the possibility of a reunion with ACCEPT. The singer, who last reconnected with ACCEPT in 2005 for a number of exclusive shows, discussed the prospect of a renewed working relationship with his bandmates during an interview with "The Rock N Ragni Show".

Speaking about the fact that Baltes and Kaufmann both appear on the new album from his U.D.O. project, "We Are One", Dirkschneider said: "It's, in a way, a reunion if we were working together songwriting-wise. That was interesting. But a lot of people came up already [saying this opens the door to an ACCEPT] reunion. And I said, 'What kind of reunion?' It's not possible to do a reunion with ACCEPT. There is only one guy left," referring to guitarist Wolf Hoffmann. "Sorry, but there is no reunion with ACCEPT. Of course, some people are thinking, 'Now he's working already with Peter and Stefan.' But no. Forget this. [Laughs] Definitely not."

Last November, Hoffmann told Powermetal.cl that he no longer kept in touch with Baltes after the bassist exited ACCEPT a year earlier. "Unfortunately, when somebody leaves the band, they're always kind of out of sight, out of mind," Wolf explained. "It's very sad. I wish it wasn't that way, because we've been friends for so long. But the reality is I haven't really heard from him — even though I reached out a couple of times. He's almost like he wants to disappear or he wants to leave the music business altogether. It's sad and I still don't quite understand what really happened. But it is what it is, and we move on."

Kaufmann was the drummer for ACCEPT on nine albums but was forced to give up drumming towards the end of the band's initial run after sustaining a serious injury to his back.

Stefan joined U.D.O. as a guitar player in 1996, following ACCEPT's second breakup, and recorded nine albums with them, including his most recent release with the group, 2011's "Rev-Raptor".

Back in 2015, Hoffmann dismissed Dirkschneider's comment that the band's then-lineup — which included Baltes and ACCEPT's singer of more than a decade, Mark Tornillo — performed live "without any emotion." "It's just hilarious at this point," Wolf said. "It's just a big joke in our lives. And we just go on about our lives, and we do our thing, and we just… We let these things go by and laugh about it. He's actually sort of our press agent, in a way. He keeps us [in the news]."

About a month ago Stefan & I where asked to write a song for Germany's Musikkorps to say Thank You to the frontline...