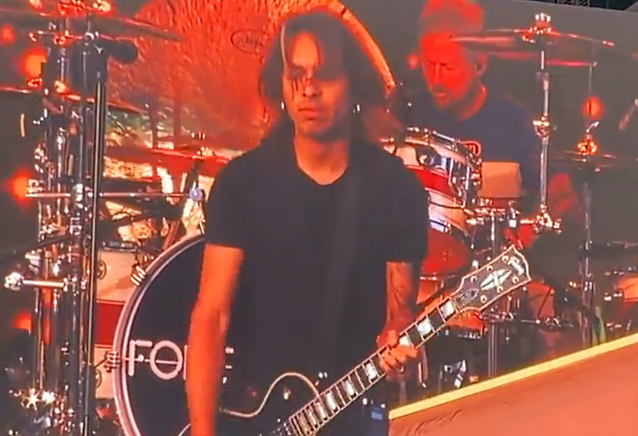 FOREIGNER played its first show with guitarist Luis Maldonado last night (Wednesday, May 19) at the Frontyard Festival in Orlando, Florida. Maldonado joined the band as the replacement for longtime multi-instrumentalist Thom Gimbel, who announced his departure from the legendary rock act a day earlier.

Frontyard Festival is taking place in a three-acre area in front of the Dr. Phillips Center for the Performing Arts in downtown Orlando. Seating comes in the form of hundreds of individual, elevated pods situated six feet apart.

"Everybody was excited," FOREIGNER bassist Jeff Pilson told Ultimate Classic Rock about last night's gig. "You know, the audience were all in those pods, because it's set up for outdoor social distancing. So it was a little more sedate of a reaction than usual."

Pilson called Maldonado a "phenomenal" guitar player who "really gets to play rock guitar like he loves. His enthusiasm is palpable [and] he's also an amazing singer," he said.

Gimbel was known as FOREIGNER's jack-of-all-trades guitarist, saxophonist, flutist and keyboardist. He initially joined the group in 1992 but left to tour with AEROSMITH before returning to FOREIGNER in 1995.

FOREIGNER's last album, "Can't Slow Down", was the only full-length collection of new songs to have been released by the band since Kelly Hansen took over vocals after original singer Lou Gramm left the band for good in 2002. The album entered the Billboard Top 30, driven by the radio singles "In Pieces" and "When It Comes To Love". The band also has released a series of live albums and compilations, including 2016's "In Concert: Unplugged" and 2017's "40".

Pilson — one-fourth of the classic DOKKEN lineup — joined FOREIGNER in 2004.

Posted by Monique Rouillier on Wednesday, May 19, 2021