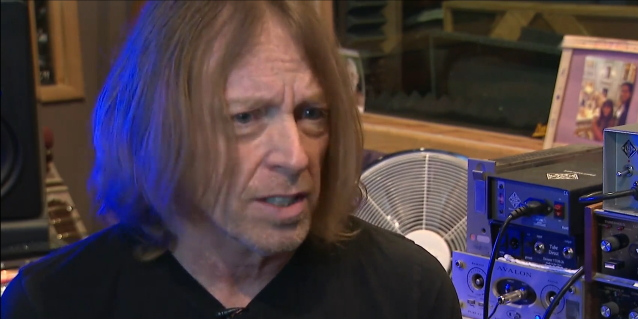 The coronavirus pandemic has had a devastating impact on the music industry, with canceled concerts, tours and music festivals, all leaving hundreds of thousands of crew members out of work. Legendary rockers FOREIGNER are trying to help by selling unique items and memorabilia online, with all proceeds going to their out-of-work crew members.

Speaking to Kacey Montoya of KTLA 5 News, FOREIGNER bassist Jeff Pilson said (see video below): "The music industry is all but shut down right now. I mean, there's recorded music, but all live music — which is the main source [of revenue for] the music industry right now — it's all shut down. So that's not just the bands — it's the crews and their families. They're having a tough time; they're not able to work. And it'll be a year before they get to work again, and that's a long time.

"Our crew means a lot to us," he added. "Not only are their family, but they are just amazing. So they deserve the best possible treatment, and we're gonna try and do our best to make it happen."

FOREIGNER's last album, "Can't Slow Down", was the only full-length collection of new songs to have been released by the band since Kelly Hansen took over vocals after original singer Lou Gramm left the band for good in 2002. The album entered the Billboard Top 30, driven by the radio singles "In Pieces" and "When It Comes To Love". The band also has released a series of live albums and compilations, including 2016's "In Concert: Unplugged" and 2017's "40".

Hansen told The Rockpit that the process of making "Can't Slow Down" was "incredibly exhausting" and "a lot of hard work." He added: "It took up any empty time that we had and our energy, and it took huge amounts of money to complete that record. And the day that it was released, people were trading it for free on the Internet. That's really disappointing, when you know how much time and effort you put into something.

"I would never say never, but from having had that experience, I think people who aren't musicians or trying to make a living as an artist will understand that it's just become the norm now — you don't pay for anything you just get it for free," he continued. "Or, even if you subscribe to a music service, the amount of cash that goes to the artist for a download or a stream is absolutely inconsequential. It means absolutely nothing to anybody. I'll give you an example. I had a large piece of a song, and I got a statement for my royalties, and it streamed 42,000 times, and I got 42 cents. That's indicative of the times."