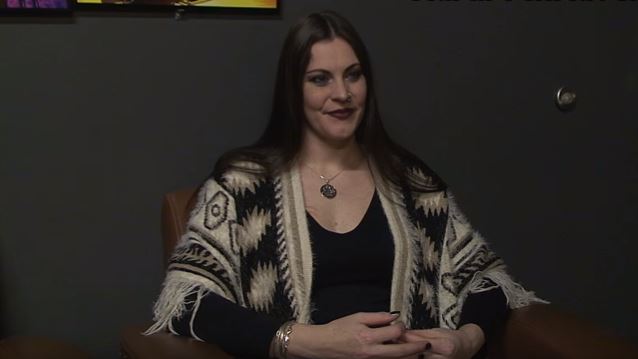 HardrockHaven.net conducted an interview with NIGHTWISH singer Floor Jansen earlier in the year during the band's U.S. headlining tour. You can now watch the chat below. A couple of excerpts follow (transcribed by BLABBERMOUTH.NET).

On the fan response to NIGHTWISH's latest album, 2015's "Endless Forms Most Beautiful":

Floor: "The one thing that sticks out for me is the reaction to the concept, or the theme that connects many songs. Many people are very enthusiastic about this and really wanna tell us this — people that come with books of [Charles] Darwin or Richard Dawkins, or even Patrick Rothfuss's book 'The Name Of The Wind', where [the song] 'Edema Ruh' comes from. So people are very taken by it. And me personally, I got a lot of very nice reactions for my vocal work; people are very happy to hear me sing on the album and are happy with what I've done."

On being joined by evolutionary biologist Richard Dawkins at NIGHTWISH's December 2015 concert at the 12,000-capacity Wembley Arena in London, England:

Floor: "It was a tremendous honor and an interesting gathering of worlds, because Mr. Dawkins is an extremely intelligent man, obviously, but not too familiar with our world. And I won't pretend to be super familiar with his either; he knows things that I can't even grasp. So you have a man who has been traveling the world to speak about his knowledge in all kinds of settings. So talking in front of groups is not unfamiliar to him, but to talk in front of 12,000 people in an arena, that he never did before. So I could tell that he was a bit nervous for this and that he didn't really understand, how does it work with that? And who's who? And how does this work? And for us, it was, like, 'Wow! What an honor that he wants to come out.' And how to have a conversation with him. And he's an extremely easy-going man and very interested. And the moment we actually rehearsed it in the afternoon was already such a goosebump moment. We could just… we could feel the hairs on your arms raise and the back of your neck starts to tickle, like, 'This is gonna be 'Whoah.'' And it was."

Jansen revealed in September that she was four months pregnant. The singer, whose partner is SABATON drummer Hannes Van Dahl, is expected to welcome her first child next year while NIGHTWISH is off the road for the band's previously announced year-long break.

NIGHTWISH will play three more shows in Asia this month before completing the world tour in support of "Endless Forms Most Beautiful".

NIGHTWISH will release "Vehicle Of Spirit" on November 4. The DVD will feature the band's performance from the Wembley Arena, along with their show at Tampere, Finland's Ratina Stadion.