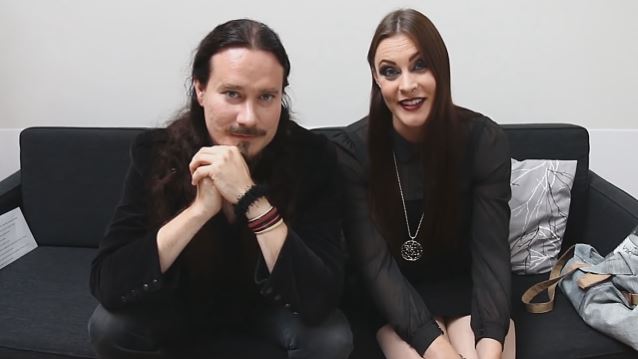 NIGHTWISH's Floor Jansen and Tuomas Holopainen have shot down rumors that the singer will leave the band after welcoming her first child in early 2017 during the group's previously announced year-long break.

Speaking to Mariskal Rock TV, the keyboardist and main songwriter said: "It's just a little break that we're taking for about a year after being constantly on the road, in the studio, in the songwriting process for the last twenty years. So it's only gonna do good for the health of the band."

Added Floor: "Well, we've had a very, very great tour from the beginning to the end. Nothing bad happened, nothing horrible came in our paths; we just had great show after great show, and great tour after great tour, and great responses from audiences everywhere on the planet. So what more could we possibly wish for?"

Asked point blank if there is any truth to rumors that Floor might leave the band before NIGHTWISH regroups in 2018, Tuomas said: "She won't quit." Floor added: "No, I won't. I love this way too much; don't worry. You don't even have negative speculations one way or another. Things are great, and let's keep on doing this forever."

NIGHTWISH will play two more shows in Asia this month before completing the world tour in support of its latest studio album, 2015's "Endless Forms Most Beautiful".

NIGHTWISH will release "Vehicle Of Spirit" on November 4. The DVD will feature the band's performance from the Wembley Arena in London, England, along with their show at Tampere, Finland's Ratina Stadion.