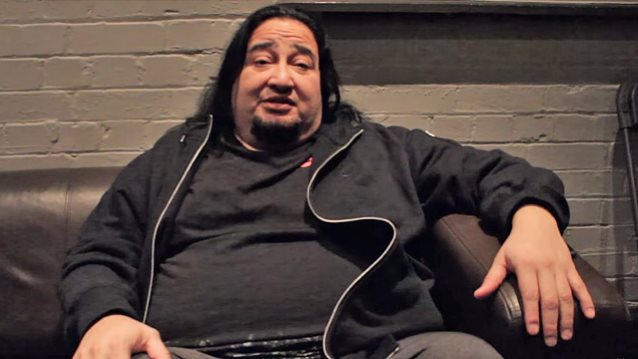 FEAR FACTORY guitarist Dino Cazares recently spoke to The Cut about when he felt like he "had made the cut" as a musician. He said (see video below): "I always felt in my heart that this is what I wanted to do for the rest of my life, and I wasn't gonna let anybody stop me from doing it. And one of the main things, when you do start a band, is you have members in the band that are like-minded: they wanna make this their living, they wanna make this their career. 'Cause, of course, it's not for everybody, because you do have to make sacrifices. Some bands get lucky and they make it big right away, and things become a little easier, whereas some bands, they really have to work hard at it, and we've always been one of the bands that's working hard at it."

He continued: "From when we first started, we were, like, 'Okay, we're in a band. We're touring the U.K.' Or, 'We're in a bus with twenty people.' To us, we were just happy to get out of L.A. We were happy to leave home and go explore the world and play music in front of people who appreciated it. And it wasn't until our second album, 'Demanufacture', where we actually were able to afford our own bus, and the band was getting bigger. And it was a breakthrough album for us. And at that point, we were, like, 'Okay. Wow! This is actually getting really big, and it's growing.' And we appreciated every moment of it, because we were like sponges; we just wanted to experience the culture of Europe, the U.K., you know. English breakfast, Indian food, you know what I mean? Kebabs. I mean, I bring up food, but that's one of the… All the cathedrals that we wanted to see. Stonehenge in the U.K. All the beautiful cathedrals that you see across the world and Scandinavia, Germany… everywhere… Spain. Just we wanted to experience all that. And, like I said, we were like sponges. We were kids. We were, like, 'Wow! This is exciting. Wow!' We didn't care that we didn't take showers for ten days; we didn't care. We had to eat just… bread and cheese. We were just happy just to be able to play music in front of people who liked it and just experience new things."