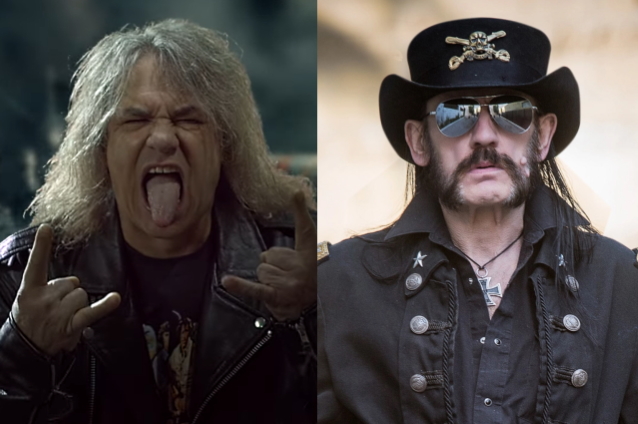 During an appearance on Zetro's Toxic Vault, the YouTube channel of EXODUS frontman Steve "Zetro" Souza, former MACHINE HEAD drummer Chris Kontos and Zetro recalled Chris's brief stint as the drummer for EXODUS when the San Francisco Bay area thrash act opened for MOTÖRHEAD for two shows in Argentina in 1993. Speaking about the backstage shenanigans that took place during the short tour, Zetro said: "Me and Rick [Hunolt, then-EXODUS guitarist] bought crank [Editor's note: slang term for methamphetamine] off of [MOTÖRHEAD mainman] Lemmy… We were at the venue 'cause we had the soundcheck. And you guys went back. But me and Rick stayed there, and Lemmy was in his dressing room. We knew he had crank. And Rick goes, 'Let's ask Lemmy for some. Zetro, go ask him.' 'You ask him.' 'You ask him.'… So I walk up to him [and say], 'Lemmy, hey, bro, you think you can sell me and Rick some of your whizz?' 'Cause they called it whizz. And he's all, [imitates Lemmy's voice] 'I didn't know you guys did this stuff. I thought you did that cocaine shit.' And I was, like, 'No. We like crank. We like to get wired.' He fucking pulls out this… He's got it in his jacket — in a patch. He had this patch that was there, and then [he would pull it back], and it was right there. And I'm, like, 'You brought that in?' 'Cause back then you didn't carry. It was the '80s. You didn't fucking transport shit. If you got caught with anything, you were in trouble, especially in South America. And so he gives it to us. And Lemmy tells me, he goes, 'You know, when you're on speed, you're 80 percent smarter going up, but you're 80 percent dumber when you're coming down.'"

He continued: "We just sat there drinking Jack. And so me and Rick, we snorted it. [Lemmy] took a spoonful and he put it in his mouth. And I went, like [makes puking sound]. I wanted to puke… And we sat there for five hours in MOTÖRHEAD's dressing room — me, Rick and Lemmy, drinking Jack and doing crank. [It was] not the first day [of the tour]; it was the second day. And I was telling everybody, 'Till the day I die, I'm gonna be telling this fucking story to my grandkids.' And I'm telling this fucking story now. Lemmy's gone. And I even said that, 'I'll be telling this story way after Lemmy's gone.' And I tell the story. And it's just, like, oh, man, it was the time… It was early '90s. It was still on. The game was still on, bro."

In a 2009 interview with Kerrang! Radio, Lemmy said that drugs never became a problem for him. "I was always in control of it," he said. "You can't let it get control of you. You can let it do things for you, and then when it gets to the point where you think, 'I can't move a muscle if I don't have something,' then that's bad; then it's taking you. The only thing I ever saw anybody die on was heroin and downers, which is a longing for heroin. I never did heroin. I always had enough sense, touch wood, to stay away from it, because it killed my old lady and it killed a lot of my friends, and it didn't kill them well. First it turns you into a thief and then it kills you. It's a miserable drug, I wish people would realize that. It's fashionable again now, isn't it? Escapism. But you can only escape so far. When you wake up after escaping, the problem's still there, so it's worse."

Lemmy died on December 28, 2015 at the age of 70 shortly after learning he had been diagnosed with cancer.

MOTÖRHEAD had to cancel a number of shows in 2015 because of Lemmy's poor health, although the band did manage to complete a European tour a couple of weeks before his death.