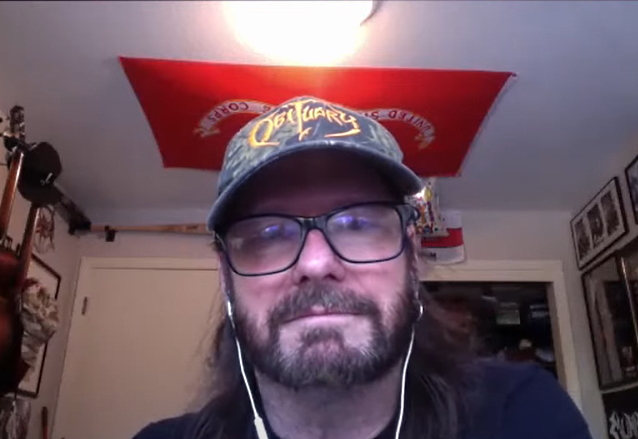 In a new interview with Finland's Chaoszine, EXODUS guitarist Gary Holt spoke about the band's new song "Clickbait" which decries the fact that the 24-hour entertainment news cycle has forced clickbait journalists to come up with sensationalized headlines for stories that are often misleading.

"Everything you read, just about, nowadays, it's clickbait," Gary said (as transcribed by BLABBERMOUTH.NET). "It's very seldom that a headline is actually what is said. Or at least it's wildly taken out of context. Especially in politics — everything is designed to make you hit that click, because that's how they're generating their income and their money. They don't care if you read it; they just want you to click the link. And sometimes they have to lure you in — it's like baiting a trap."

Asked if the clickbait culture has changed the way he approaches interviews and whether he gives more consideration to what he says to the press nowadays, Gary said: "I try; the funny thing is I try. But one thing that gets lost in a print interview is the human factor. You and I can talk right now and I can say something and then there's a big laugh at the end of it. But you read it without the laugh, without the smile, without the human reaction, and it comes off just very static and very straight. It comes out totally different. If everybody watched every interview as a video, you'd have a completely different impression sometimes of what was said."

Holt went on to say that he doesn't necessarily see the clickbait culture as a problem. "It's just an annoyance," he explained. "Everywhere you look, there's some headline that has stolen a little fragment of truth from whatever was said, and then it's completely magnified and thrown out of all context to lure the viewer in, to click it and generate the income. Politics, everything's fucking clickbait. And I'm not a fake-news guy. I'm a centrist liberal. And you look at the fucking headlines. Especially now, any time [U.S. president Joe] Biden stumbles on a word, they make him out to be senile. And I spent four years watching a man stumble on every fucking word he said," Gary added, apparently referring to former U.S. president Donald Trump who was frequently lambasted by the mainstream media for giving incoherent speeches laced with baseless conspiracy theories.

"Clickbait" appears on EXODUS's new album, "Persona Non Grata", which was released on November 19 via Nuclear Blast Records. The LP is the follow-up to 2014's "Blood In Blood Out", which was the San Francisco Bay Area thrashers' first release since the departure of the group's lead singer of nine years, Rob Dukes, and the return of Steve "Zetro" Souza, who previously fronted EXODUS from 1986 to 1993 and from 2002 to 2004.