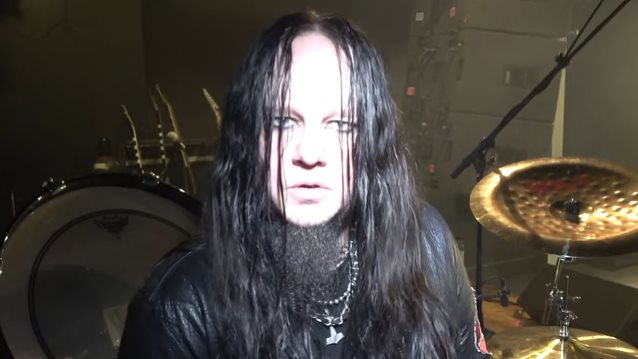 On the latest episode of Digital Tour Bus's "Gear Masters", former SLIPKNOT and current VIMIC drummer Joey Jordison shows off the gear that he used onstage during the latter band's recent run of U.S. dates. The clip, which was filmed on December 28, 2016 at the Bottom Lounge in Chicago, Illinois, can be seen below.

VIMIC last week postponed its previously announced European tour so that the group could finish work on its debut album, to be released later this year.

"The band and I feel horrible but I want to give fans the best experience possible and we felt completing the album before the tour makes the most sense," Jordison said. "I promise we are going to visit Europe towards the end of 2017."

Often referred to as one the best drummers in the world by fans, musicians and media thanks to his unique style, sound and lightning fast technicality, Joey Jordison has, in addition to co-founding SLIPKNOT, worked with some of the biggest-selling acts in hard rock and heavy metal, including METALLICA, KORN, ROB ZOMBIE, MARILYN MANSON and many more. Before his departure from SLIPKNOT in late 2013, Jordison had been quietly struggling with the career-threatening neurological condion acute transverse myelitis, an inflammation of the spinal cord which damages nerve fibers, which ultimately led to Jordison losing the use of his legs. Never one to quit or back down from a fight, Joey overcame the impossible through months and months of rehabilitation, regaining the strength to walk again. He is feeling stronger than ever and is eager to show the world what is possible.

VIMIC's upcoming effort, "Open Your Omen", is described in a press release as "quite possibly the biggest triumph of Jordison's illustrious career." He says: "The riffs, lyrics, and drums of 'Open Your Omen' will tell you a lot.

"I started this record when I was coming out of the acute transverse myelitis condition. It's literally what saved me and helped me get back to where I'm healthier than ever.

"These guys and this album pushed me to not only relearn how to walk, but how to play the drums again. 'Open Your Omen' is the rebirth of the rest of my life."