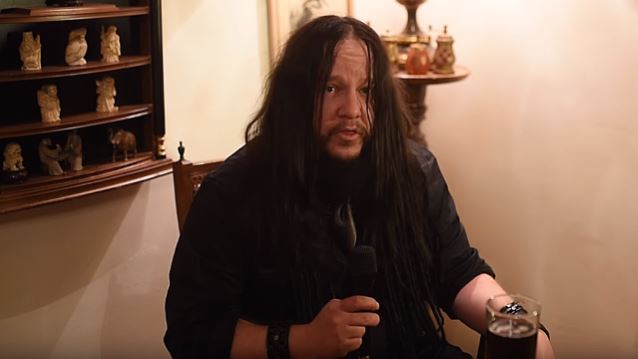 SINSAENUM, the project featuring Frédéric Leclercq, virtuoso bass player of London-based power metallers DRAGONFORCE, and Joey Jordison, formerly of SLIPKNOT and currently of VIMIC, will release its debut album, "Echoes Of The Tortured", on July 29 via earMUSIC. The CD was mixed in Fascination Street Studios in Örebro, Sweden, where Jens Bogren (OPETH, KREATOR, DEVIN TOWNSEND) put the finishing touches to 21 tracks that are — in one word — expansive.

In the 14-minute clip below, the members of SINSAENUM talk about the creation of the band, its meaning, its style and future plans.

Regarding how SINSAENUM was formed, Joey said: "Actually, Fred from DRAGONFORCE, we toured together, and I was a big DRAGONFORCE fan. And, basically, we just got to know each other just through hanging out backstage and having some drinks and respecting each other's bands and watching each other play. And I didn't realize how big of an extreme metal fan and death metal fan and black metal fan Fred was; it was very surprising, because never judge a book by its cover. Not that… DRAGONFORCE in power metal fucking rules; it's some of the most powerful shit. [But] I had no clue how fucking in-depth this motherfucker was into death metal; I could not believe it. And we hung out one time, and next thing we know, it was just constant MORBID ANGEL and fucking all middle of '90s to early 2000s death metal, and just reciting a bunch of fucking songs and just hanging out. And that's how we got to really know each other. We just connected like that. Then we started talking about black metal bands and our influences like that. And, basically, we just started hanging out, and it just grew and grew and grew; it was, like, night after night. We were just hanging out all the time. And next thing you know, we started talked about a band."

He continued: "A lot of people, when they're on tour, people start having drinks and everyone's, like, 'One day we're gonna do something like this.' We actually did it, and we're doing it right now, which means the world to me, and it means the world to them. And the fact that we're all together, and we're all from different places, and it's fucking happening. I mean, I recorded the record a while ago, and we've been writing the record for a long time now, but now that we're all here together, it's fucking powerful — it's fucking powerful."