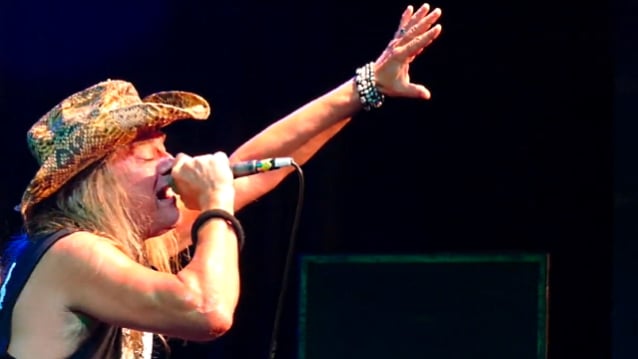 Former SKID ROW singer Johnny Solinger has been forced to reschedule his previously announced solo shows later this month due to injuries sustained in a car crash late last year.

Solinger, who was a member of SKID ROW from 1999 to 2015, appearing on the "Thickskin" and "Revolutions Per Minute" albums, as well as the "United World Rebellion" and "Rise Of The Damnation Army" EPs, posted an update on his health status on his social media earlier today (Monday, February 10).

He wrote: "My friends - back in December I was T-boned on passenger side in an automobile accident (thank God Paula Marcenaro Solinger was not in vehicle...very scary). In January I began Physical Therapy and an MRI was ordered. X-rays have shown herniated 'bulging' discs in back and neck and this past Friday Doc has ordered to reschedule shows for 6-8 weeks as treatment continues. I have a great team of Medical pros working with me 3 times a week and I am assured at the end of treatment I'll be good as gold. Of course I am pissed and disappointed that I cannot perform the BUCKCHERRY at Warehouse Live show Feb 21 and my Johnny Solinger w QUEENSRŸCHE & DOKKEN tributes at Warehouse Live solo show Feb 28th will have to be rescheduled, but extremely blessed that it was not worse and that my wife was not in the vehicle. So, be careful driving out there, and defo buckle up for safety! Keep your insurance up to par and #lawyerup #besafe."

According to KNAC.com, Solinger has been busy working on new solo music in both the country and rock genres. Last year, he recorded country music with producer Sam Taylor (KING'S X, ZZ TOP), and several other musicians, including Jamie Oldaker (Eric Clapton) on drums. More recently, he was one of the lead singers and performers of the show "Raiding The Rock Vault", which just wrapped up its two-year-plus residency at the famed Hard Rock Casino And Hotel.

Some of Solinger's postponed shows were being billed as the singer performing a "20th-anniversary set of classic SKID ROW, old and new." He told KNAC.com that he wanted to sing SKID ROW songs for the first time after being away from the band for five years because of a renewed interest in everything rock, including bands like KISS, DEF LEPPARD, POISON and MÖTLEY CRÜE. "I have toured with all of them, and it's a joy to witness this 'second coming' of my beloved rock 'n' roll," Solinger said.

Solinger was fired by SKID ROW in April 2015 and replaced by TNT singer Tony Harnell. Tony quit the group only eight months later, and was succeeded by the South African-born, British-based singer ZP Theart, who previously fronted DRAGONFORCE, TANK and I AM I.

SKID ROW bassist Rachel Bolan confirmed to the "One On One With Mitch Lafon" podcast that Solinger was kicked out of the band, contradicting the singer's claim that he "decided to leave SKID ROW to pursue [his] solo career."

Asked what led to Solinger's departure from SKID ROW, Rachel said: "It was evident. There were certain things going on out on the road that kind of set us thinking… Things had been going on for a little bit. And, you know, I'm not here to say anything bad about the guy.

"At certain times, you just get the feeling someone isn't putting a hundred percent into things," he added. "And SKID ROW is very important to the rest of us. And we wanted to carry on with quality performances and quality songs, so we decided to make a change."

Asked if there was ever a time where they felt things were "clicking" and "100 percent right" between Solinger and the rest of the band, Rachel told "Eddie Trunk Live": "We were clicking big time. I thought we made a lot of great music together. And even with [the ongoing trilogy of] EPs, when we were in the studio, we were making great music. Snake [guitarist Dave Sabo] and I would write, and everyone came in and really sunk in. I think it was when we were in the studio that it really became evident that we all didn't have the same heart and soul… We weren't all putting the same heart and soul into it. And it's just one of those things, man. It's rough to make a decision like this, but we did."

Added Snake: "This has nothing to do with Johnny not being a good person; he's a really good person, and we all got along well. There's no animosity at all from our end. And these are terrible decisions to make, man. They're awful. The guy's been with us for fifteen years, and we saw a lot of miles of road together, and I feel extremely fortunate to have spent that time in a band with him. And he's a great singer and he's gonna be fine. He's gonna pursue his solo stuff, I guess, and that's what he should do."

On the topic of how Solinger reacted to being fired from SKID ROW, Snake said: "There was no screaming and shouting. We were both very respectful to one another. And we should be. I mean, like I said, we've traveled a lot of miles together, and this is not something that is easy in any way, but yet it's something that was necessary."

Asked how parting ways with Solinger was different to the split with Sebastian Bach in 1996, Rachel said: "That was a completely different situation. There was a lot of bad blood there, and… Yeah, it was a completely different situation. This is something, like Snake said, there's no animosity. It's just… We all didn't have our eyes on the same prize at this point, and it interfered. It interfered with moving forward. And that's why we made a change."

*Show Announcement* My friends- back in December I was T-boned on passenger side in an automobile accident (thank God...