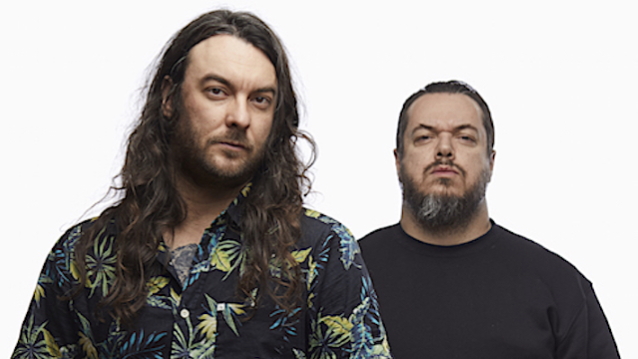 "Radiation Facial", a new song from PETBRICK — the duo comprising Wayne Adams (BIG LAD, DEATH PEDALS, JOHNNY BROKE) and Igor Cavalera (SEPULTURA, SOULWAX, MIXHELL, CAVALERA CONSPIRACY) — can be streamed below. The track, which features a guest appearance by FULL OF HELL's Dylan Walker, is taken from PETBRICK's debut album, "I", which will be released on October 25 via Closed Casket Activities in the U.S.

PETBRICK has arrived at an audial destination whereby electronic experimentation, hardcore attitude, dystopian dread and in-the-red dementia collide and collude to form a uniquely invigorating assault, custom fit for an accelerated age. This debut explores fresh lunacy anew whereby both members' past experience — Wayne in a variety of musical guises ranging from punk to breakcore and gabba, and Igor in a planet-straddling metal colossus whose questing spirit played a crucial role in the music's evolution — is both profitably employed and left obsolete by a resolutely genre-free onslaught whose spirit remains firmly in the here and now.

The result is free to traverse anywhere from full-throttle intensity (as with INTEGRITY's legendary vocal exorcist Dwid Hellion on "Some Semblance Of A Story") to exhilarating melodic counterpoint (Laima Leyton of MIXHELL on "Coming") and stream-of-consciousness lunacy from WARMDUSCHER's Mutado Pintado, whose splenetic tirades on "Gringolicker" valiantly attempt to inhabit the increasingly unhinged persona of Donald Trump.