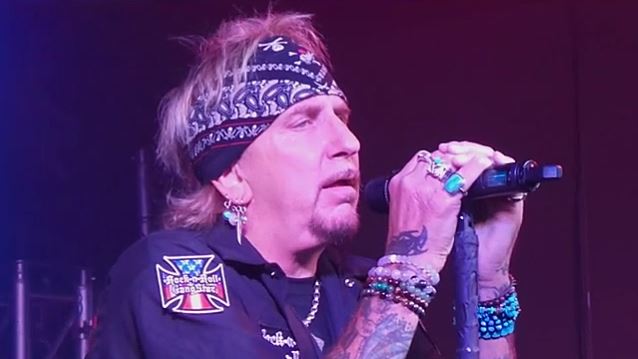 On May 13, former GREAT WHITE and current JACK RUSSELL'S GREAT WHITE singer Jack Russell was interviewed on the "Music Mania" podcast. You can now listen to the chat in the YouTube clip below. A couple of excerpts follow (transcribed by BLABBERMOUTH.NET).

On his upcoming album, "The Gauntlet":

Jack: "It's very eclectic, and there's some stuff on there like nobody's heard. Like there's a song called 'My Addiction', which is straight to the point; I mean, there's no punches drawn about my life and about the things that I've been through. It's just a really heavy, spooky-sounding song. There's a lot of really heavy songs on this record. And the guitar playing is just phenomenal. I've never had a guitarist that I've ever worked with in all my years that has been as good a guitarist as Robby Lochner. And the two of us have been writing some brilliant songs together. I hate to sound like I'm patting myself on the back. I'm just being honest. I don't take credit for the songs. I just think they're a gift from wherever."

On whether the death of original WARRANT singer Jani Lane in 2011 motivated him to get clean:

Jack: "Yeah, but, unfortunately, at the time, it wasn't enough. I mean, it was for a while, but then my disease started going, 'Well, you're not Jani Lane. No doctor's ever told you that, so you keep on drinking.' And I'd binge for a while, and I'd sober up. The last time I did that was, like, eight months ago; I went on a binge and I drank, like, Mai Tais in, like, twenty minutes. And I kept falling off the bar stool. [And they told me], 'Hey, dude, we love you here, but you've gotta go. Or else we'll call the cops.' So Don Dokken, who was with me, took me to my boat and dropped me off. And my wife was just furious. And she put me in bed, and the next morning I wouldn't wake up... I was in a coma eight months ago from drinking too much. The doctor told me when I woke up, 'If you drink again, your liver's gonna shut down and you're gonna die.' And I went, 'Okay.' So I'm not gonna take the chance. I'm doing good right now. My body's in great shape. I've been working out. I've been running. I've been… stuff I thought I could never do again after all my accidents. I just took care of myself, got some muscle on me, and I'm back on stage doing what I used to do. It's great."

On being seen by some as a "survivor" of the deadly blaze on February 20, 2003 at The Station in West Warwick, Rhode Island, killing a hundred people and injuring hundreds more:

Jack: "Yeah. You know, I appreciate it. It's something I wouldn't say. But truthfully, yeah, I guess it is. I lost a lot of friends, and unfortunately, being the lead vocalist of the band, people are gonna blame the band, and they're gonna look at me and blame me. I've had people call me a murderer, and that stuff is just… I mean, it just tears your heart out. I don't have a bad bone in my body; I don't wish harm on anybody. Usually, you're supposed to make people feel good and enjoy themselves. I mean, if we knew something like this would happen, we wouldn't have done the show, of course. But the fire marshal had illegal foam up there, which we weren't aware of. And the worst happened. It's hard. I deal with this every day. I'll look out here and I'll see the sunrise and I'll start bawling, because there's a hundred people that'll never see that. And I don't get upset when people blame me, because if that's the way… if they need to do that to grieve and if it helps them, more power to you. It hurts, but if it helps them in any way, that's fine."