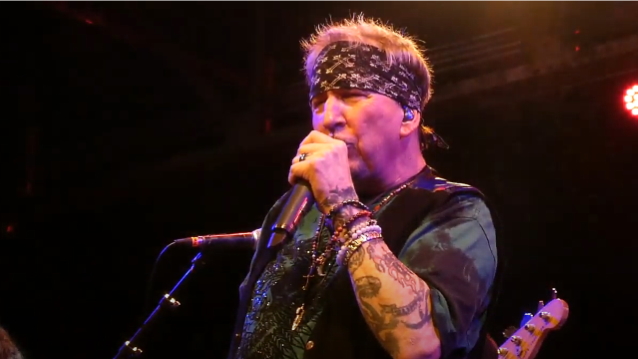 In a new interview with Rock Show Critique, former GREAT WHITE singer Jack Russell spoke about how most hard rock and heavy metal artists get the bulk of their revenue from live performances instead of album sales. "Everything is backwards," he said (as transcribed by BLABBERMOUTH.NET). "There is no money in record sales, at least not for artists of our ilk. Touring has become the way you earn a living. It's a whole different animal. A lot of bands, unfortunately, can't tour. They don't have a following, or they have such a small following [that] they can't really make any money at it. Or make a little bit of money and just squeak by, having day jobs and whatnot. So I consider myself very blessed that I'm still able to do what I do at my age."

Russell also talked about what playing shows has been like during the coronavirus pandemic. "I'm not really scared," he said. "I guess I probably should be. But I'm cautious and I take precautions. But I'm really not scared so much. I think if you take care of yourself and you watch what you're doing and you have your eyes open and take the steps you need to take, I think you can be pretty safe."

In a separate chat with Robby Lochner, Russell — who exited GREAT WHITE in December 2011 after he was unable to tour with the group due a series of injuries, including a perforated bowel and a shattered pelvis — said that he will continue to perform live despite the fact that he is not as physically fit as he once was.

"I've had health scares and health problems for quite a few years, and I'm not letting it take me down," he said. "I still go out and do my shows and do what I have to do and still enjoy life. I'm not gonna let my health issues set me back or keep me off stage and keep me away from the people I love… My family and friends, my band… I mean, I consider them all my family."

When Russell split with GREAT WHITE a decade ago, he largely blamed his injuries on his alcohol and painkiller addictions as well as the prednisone drug he was prescribed.

Russell sued his onetime bandmates in 2012 over their continued use of the GREAT WHITE name after Jack had taken a leave of absence from the band for medical reasons. A short time later, Russell was countersued by guitarist Mark Kendall, rhythm guitarist/keyboardist Michael Lardie and drummer Audie Desbrow, claiming the vocalist's self-destructive behavior was damaging the GREAT WHITE name (they also alleged he was charging promoters less for his own touring version of GREAT WHITE). The parties settled in July 2013 without going to trial, with Russell now performing as JACK RUSSELL'S GREAT WHITE while the others are continuing as GREAT WHITE.

More than three years ago, GREAT WHITE announced the addition of new singer Mitch Malloy to the group's ranks. He replaced Terry Ilous, who was fired from the band in July 2018.

Russell, who celebrated the fifth anniversary of his getting sober in September 2020, had been living on a 45-foot boat in Redondo Beach, California for nearly a decade before recently moving to Colorado with his wife.