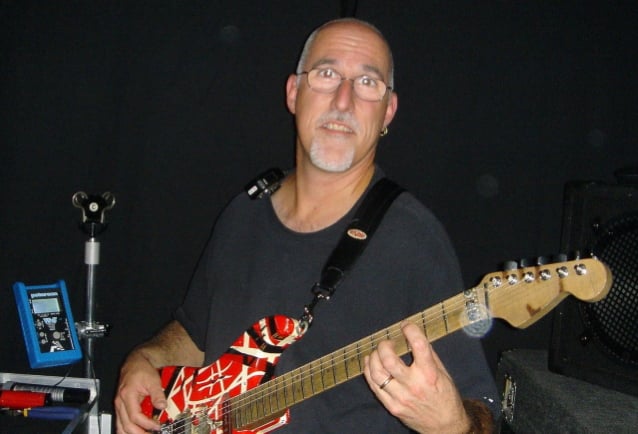 A GoFundMe page has been launched on behalf of Eddie Van Halen's guitar tech Tom Weber to save his home in Butler, Kentucky. As of Wednesday morning, it has raised more than $14,000 of its $35,000 goal. Sandy Espinoza, of the nonprofit group Roadiecare, organized the fundraiser.

Though in demand in normal times, the last few years have been especially trying for Tom, not just with the passing of Eddie Van Halen, an employer and friend, but also with the loss of his business after his guitar repair shop was forced out of the building where it had been located for 25 years. The loss of the business has been compounded by the sale of two other buildings where what remained of Tom's business has been stored. One of the buildings was sold recently, which makes it necessary for him to move yet again, at a time where there is no income, and no potential for work on the horizon in the foreseeable future due to the total collapse of the live entertainment industry because of COVID-19.

"I'd try to get back into a shop if I wasn't in a position to lose my home," Weber said, but with the coming expense of having to relocate or lose what's left of what was supposed to be his eventual exit from touring, and ever-growing debt on his family's home, it will soon be a choice between one or the other.
"Things are looking pretty bleak at the moment, I won't lie," Tom said. "I have been looking for employment, but am told I am over-qualified for the jobs that are available in the area I live in or that the job is more suited to a younger candidate, and now with the uncertainty about the house, it feels like I am chasing my tail... I'm most worried about how this is affecting my family and the uncertainty each day brings. I just don't know."

Weber, who worked with VAN HALEN in 2007 and 2015, told the Cincinnati Enquirer that he was scheduled to tour with country star Reba McEntire in early 2020 before hooking up with POISON as the support act on MÖTLEY CRÜE and DEF LEPPARD's "The Stadium Tour".

"It was going to be one of those years where my family wasn't going to see me, but it was going to be a $200,000 year. And I thought, 'This will allow me to pay off my house. It's going to be amazing,'" Weber said. "And, of course, it went from a banner year to zero income overnight [due to the pandemic]."

Weber also spoke about his relationship with Eddie, who died last October at the age of 65.

"As far as special to work with arguably the greatest guitar player of our time," he said. "As a guy, I don't want to say we developed a fast friendship, because that's not how Ed worked, but we were family, and basically he developed a trust in me for what I did for him and my insight into what things should have been on a daily basis.

"The last conversation I had with him, we were discussing when we would potentially go out again, and he said, 'Whatever happens, you'll be my first phone call, because I'm not leaving the house without you.'"

Weber previously praised Van Halen's playing technique, saying: "Ed is a force of nature. I understand the math behind how a guitar works. Ed does things on the guitar that defy the math. I've sat with him and watched him do things that you can't do. Ed doesn't play guitar, the guitar submits to Ed's will. It's truly an amazing thing. It's a very inspiring place to be."

Eddie Van Halen played his final concert with VAN HALEN on October 4, 2015 at at the Hollywood Bowl in Los Angeles. It was the last show of the band's summer 2015 tour, which marked VAN HALEN's third time hitting the road since David Lee Roth rejoined the group in 2007.

Eddie and Alex Van Halen formed VAN HALEN in 1972 in Pasadena, California, with Roth on lead vocals and Michael Anthony on bass.

After undergoing hip replacement surgery in 1999 due to a chronic joint problem, Eddie was diagnosed with mouth cancer in 2000 and had to have part of his tongue surgically removed. He later battled throat cancer and reportedly had been receiving radiation treatment in Germany. It is believed that his heavy smoking over the years contributed to his long battle with cancer.