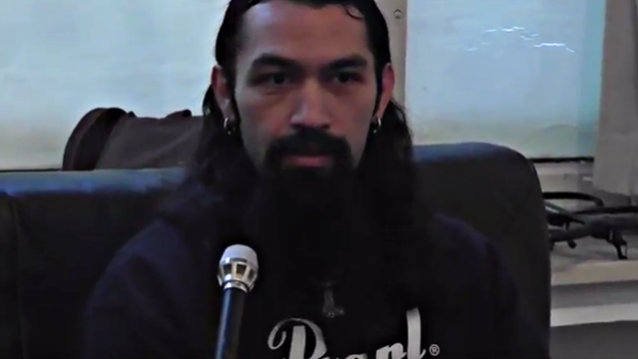 Austria's Metal Underground conducted an interview with new AMON AMARTH drummer Jocke Wallgren (formerly of OCTOBER TIDE and VALKYRJA) on November 19 in Munich, Germany. You can now watch the chat below. A couple of excerpts follow (transcribed by BLABBERMOUTH.NET).

On what it has been like touring with AMON AMARTH the past few months:

Jocke: "It's great. It's really good. It's a lot of difference from my other tours I've been doing with my other bands. So, yeah, I can't say anything more than I'm pretty stoked about it. It's super fun every day. The crowd is good, the crew is good, the band is great. [It's] perfect."

On whether it has been hard to find time to tour with AMON AMARTH while still staying involved with his other bands:

Jocke: "Not anymore. AMON AMARTH is my only band right now. It's not official yet [laughs], from the VALKYRJA camp. But I think everyone understands that it's not possible to have a big band as AMON AMARTH and also have other bands, because I'm not home very much. So I'm pretty much on tour, I would say, three fourths of the year, so it's really hard to have other stuff going on as well."

On how he landed the AMON AMARTH gig:

Jocke: "I was recommended by Tobias [Gustafsson; VOMITORY, CUT UP], who made the drums for [AMON AMARTH's] 'Jomsviking' album. And then I got a phone call from Olavi [Mikkonen, AMON AMARTH guitarist]. And that's how it goes, pretty much."

On whether he plans to stay with AMON AMARTH for a while:

Jocke: "Yes. That's my intention, yeah. I have big plans. I wanna be in AMON AMARTH for a long time."